I was provided a sample from Coolcore and promotional credit from Spothero, but all opinions are my own! 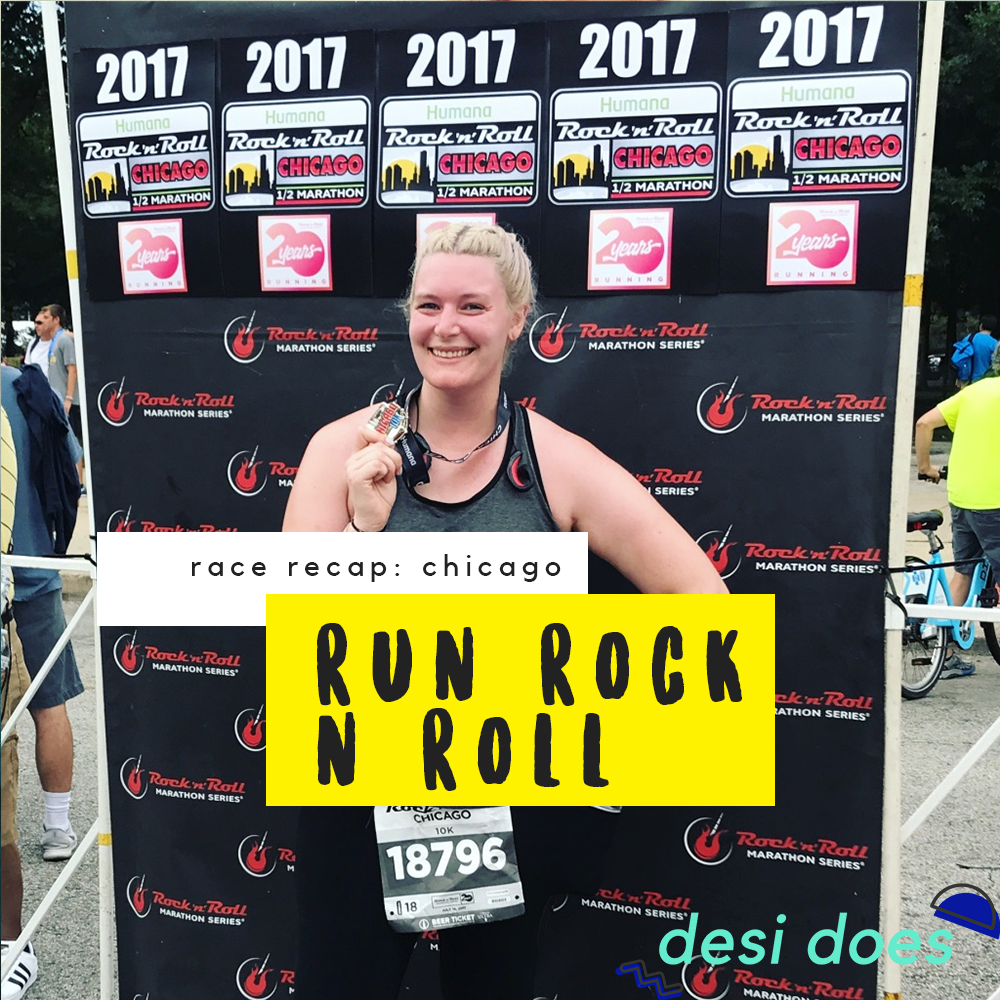 A few months ago when I started spending more time with my grandparents, my grandpa asked if I was still running. I wasn’t, but I thought about it often. On a whim, I signed up for the Chicago Rock ‘n Roll 10K – it was National Running Day and that seems to be an annual tradition of mine. My first half-marathon was the Run Rock ‘n Roll Cleveland half a few years ago, so I know the series and had had a great time. I thought I’d certainly have time to train up and get into shape to knock out some consistent 12:00 miles, never mind that my training has ranged from non-existent to inconsistent at best for the last few years. Nevertheless, I was excited to take on a race length I’d never done before!

Leading up to the race, I would hit the elliptical about five days a week for 30-60 minutes… starting about two weeks before race day. (At least I was trying!) The expo was at McCormick Place, which is officially my least favorite place in Chicago. Pro tip: if you’re ever headed there for a packet pickup, enter the Hyatt Regency as the destination, or else your GPS will bring you under the convention center where there’s no way to get in. Dani and I trotted around the expo quickly – the KT Tape line was mercifully short, and the free loot was pretty good. Rock Tape was there as well, but I resisted the urge to cover my entire body in kineseo tape. I’m excited to try the Muscle Mac we got. I also splurged on a race shirt – it’s almost like Brooks heard I was coming.

I guess @brooksrunning got the message that I’m running #RNRCHI tomorrow!!! (I bought it) pic.twitter.com/iRgLypdb76

The night before the race I definitely had some nerves that I didn’t expect. My race day plan had turned into “finish, and don’t fall,” so I wasn’t anxious about hitting a goal time by that point. I did have a vague stretch goal in mind, but I didn’t want to do anything stupid and get hurt. I did the requisite pre-race preparation by getting my gear bag ready, putting the bib on my Fitletic belt, setting out my outfit, and plugging in the headphones to charge. I had received a tank from Coolcore to test out, so I paired that with my much beloved Superfit Hero capris. I bagged up three Olly Endless Energy vitamins to use as chews halfway through the race, then settled into bed to make plans to get downtown for the race. Arranging early morning transportation is one of my least favorite things – will there be Lyft drivers online before 6am? What time does my bus start running? I opted to bypass that and instead pre-book a parking spot by using SpotHero. I parked three blocks from the start/finish line, and it made it super easy to get downtown and save me some grief. If you’re running a downtown Chicago race, I highly suggest opting for that!

Like the last Run Rock ‘n Roll race I did, corrals were well-signed, and gear check was easy to find and navigate. They even had pre-race bananas and water, which was great since I had managed to walk out of the house without water.

I also want to give a big ‘ol shoutout to the lady I stood next to in the corral who was on the phone getting a pep talk from a friend. She said “I’m learning not to compare myself to the runner I once was and to instead embrace the runner I now am.” I’ve thought about that a lot since I heard it, and I was so thankful to be hearing it.

The race started at 6:30am with corral 1, and I crossed the start line around 7:00. It’s a similar start to the Hot Chocolate 5k, and I had forgotten that it starts with a bridge uphill. Woooof. I’d been having some trouble finding new running shoes to replace my long-blown out Asics, so I was running in shoes that I’d only had for two days. Probably not the smartest move, but YOLO, right? By the time I got up that first bridge my shins were SCREAMING, and I had shin splints for the first time in my life in mile one. I honestly wasn’t sure if I was going to finish the race then.

I kept on, enjoying the gorgeous lake view, listening to my music to keep my pacing… until my headphones turned off before the second mile marker hit. It was really not a great start. I got EXTREMELY down on myself for awhile, thinking about how slow I was, how embarrassing it was that I was even trying, things like that. As we rounded a corner to get a really great view of the city skyline against Lake Michigan and came upon the first band, I realized how lucky I am to even be able to go run even if it is slow. I pulled over to snap a selfie, then trotted to catch back up to the ladies I’d been playing leapfrog with as a pacing trick. 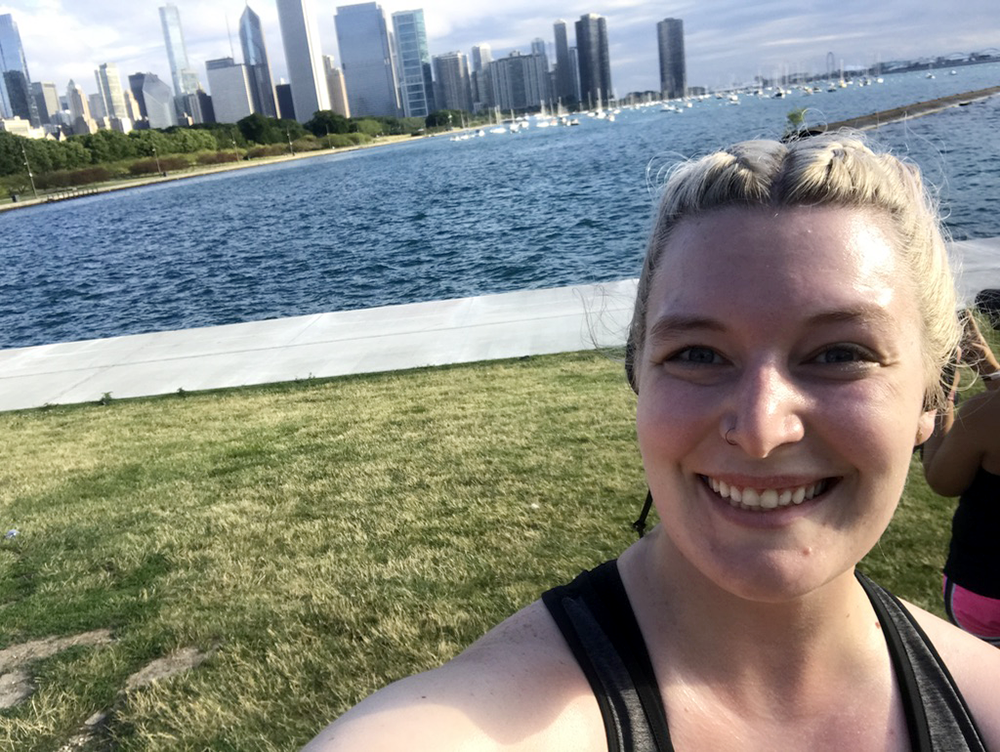 The race, my leg pain, and my splits got better after that. It’s so funny how things can be very self-fulfilling – if I would have let myself stay in the negative, I have no doubt that every step would have been painful. I tried resetting my headphones and they came back on as well. We hit the halfway mark water station, I ate my energy chews, and we merged with the half marathoners. The last band we passed featured a 90’s cover band, complete with a bassist in Zubaz – my soulmate, possibly? As we finally approached the timing clock, I could see that I was very very very close to my goal time… which I then missed by 1:02. I’m blaming that selfie! I’m pretty proud of being able to pull myself out of thinking negative, and for finishing a new distance. 10k is the perfect amount of running to not get bored, like I occasionally did in halfs. 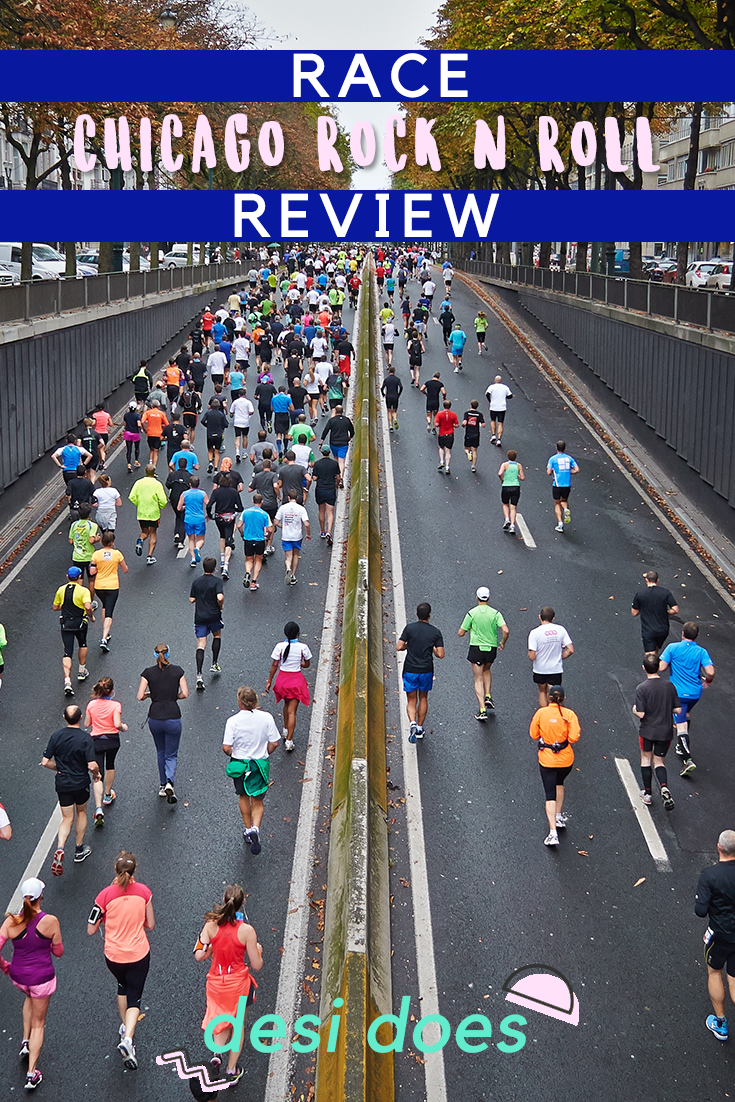 Finish line gear was amazing. Bananas, bagels, chocolate milk (my fave,) Gatorade – they were well equipped with refueling options. Finisher’s village was great – they even had wine this time for those who don’t like beer. 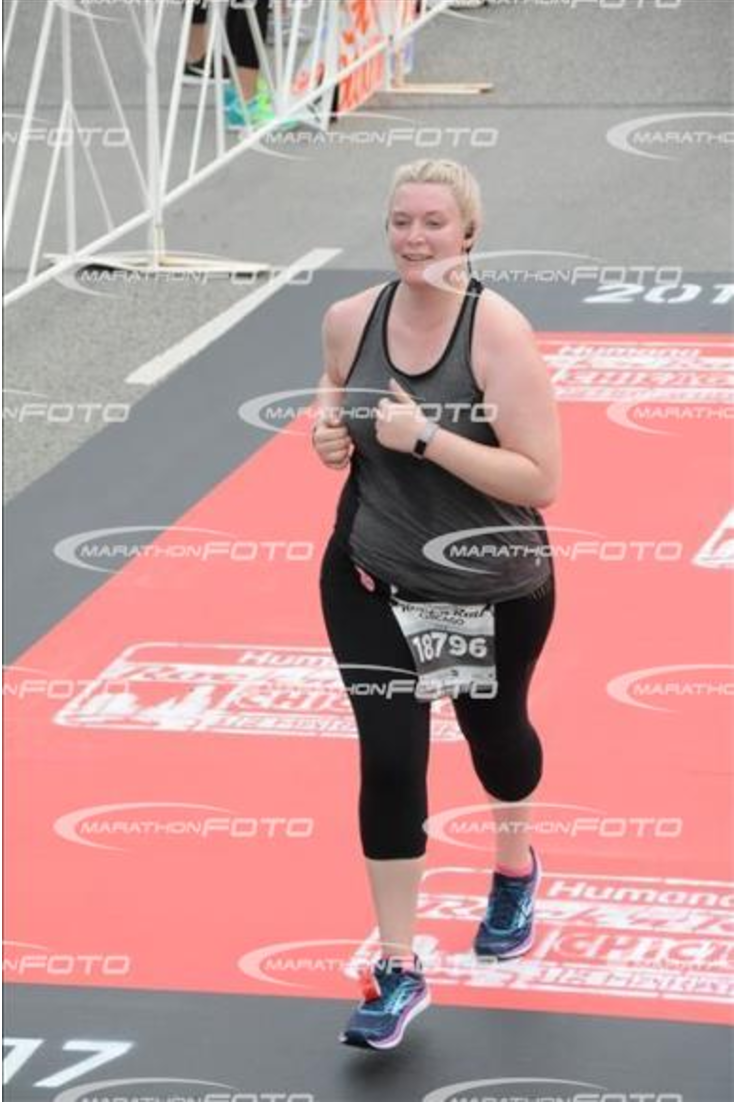 Shoutout to Dani for braiding my hair!

Coolcore‘s tank did an amazing job of pulling the sweat and moisture away from my body. I had actually worn it to a Flywheel class as well, and it did the same there, too. I was skeptical of the sizing, but I was so happy with it – the women’s XL fits loose, so it doesn’t feel like it’s clinging to you and lets you breathe. The only thing that I noticed early on in the race was that it did chafe a bit against my arms because the arm holes are a bit larger than I normally wear, but I’m very happy with it and look forward to trying out some of their shorts or leggings! 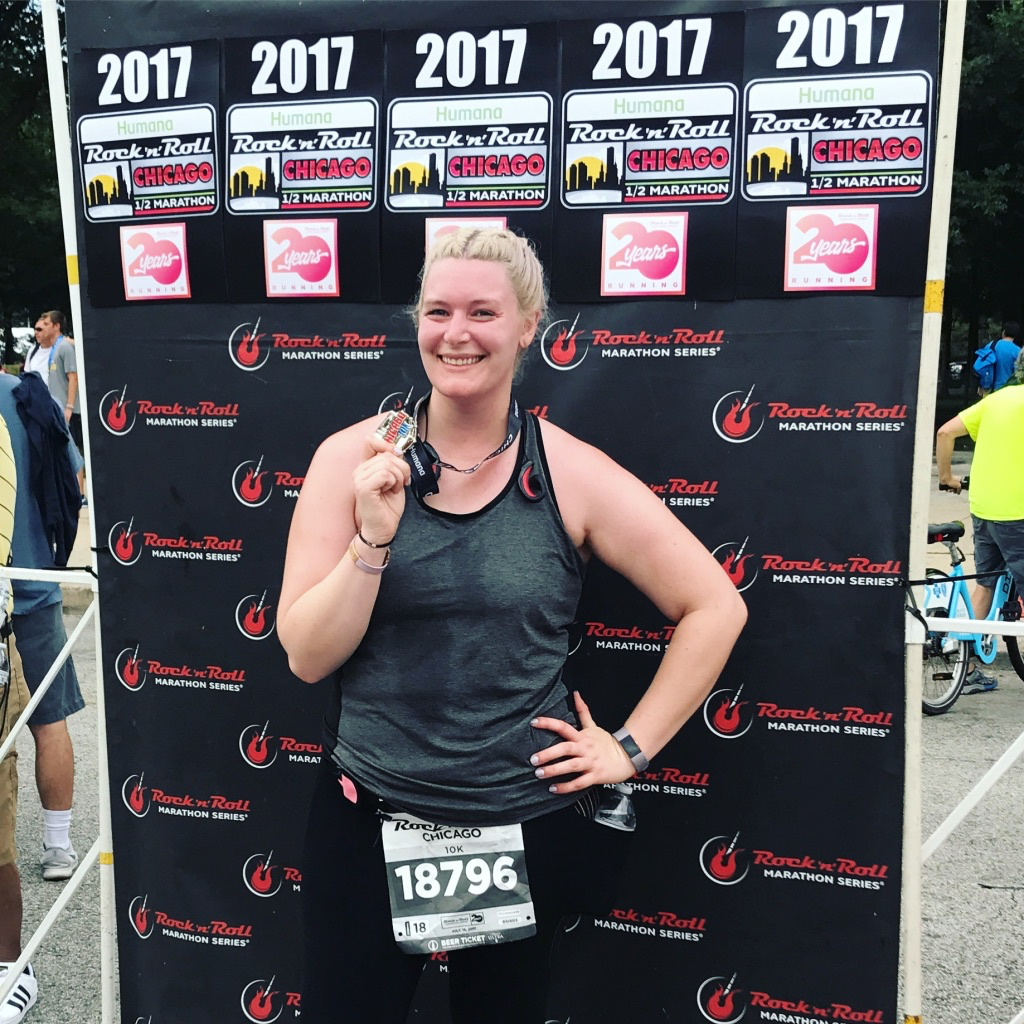 If you’re considering doing any Rock ‘n Roll race, keep an eye on Groupon. A few weeks after I signed up, I saw that they were available there too. 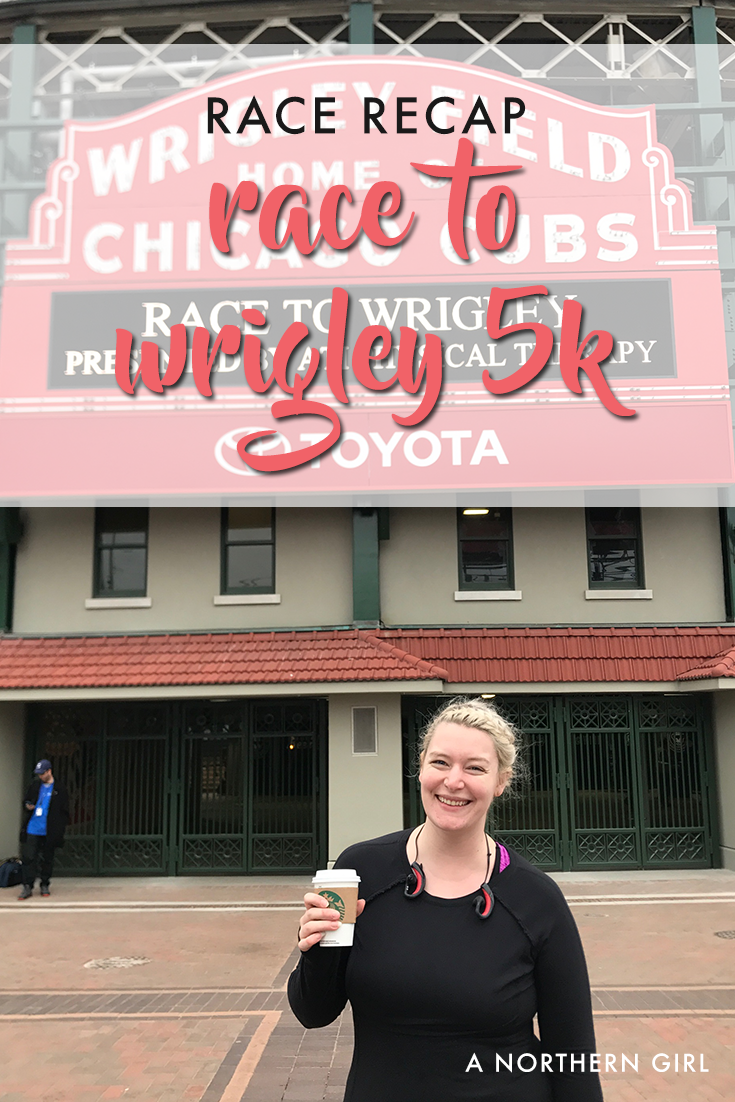 It’s been quite awhile since I sat down to write a race recap! Last weekend I headed out to do the Race to Wrigley 5k, sponsored by the 2016 World Champion Cubs.

I didn’t go to packet pickup so I can’t speak to that experience, but my partner in crime seemed to be in and out very quickly.

Saturday morning we rolled out of bed at 6am and grabbed a coffee and a Lyft by 6:45. Next year I would leave a bit later – it was a little on the chilly side, but the Cubs team store and Sports World were both open for pre-race shopping. Getting there was very easy – they hadn’t shut the streets down yet so our Lyft dropped us off right at the start line, and everything was well-signed so it wasn’t hard to navigate. For the first time I thought I might have an issue with runner’s trots, but it ended up holding off (thank goodness.) Around 7:40 they started corralling everyone to the start line, and after a few stretches and the national anthem, we were off. Thank goodness the rain held off – I’m writing this in a thunderstorm and it would have been a cold (but fun) race through this weather.

I thought the course was great – flat, easy, and not too many turns. There was a ton of course support in the form of security and police officers, and it was one of the best and safest road races I’ve ever done. The two water stops on the course both seemed like they could have benefitted from a longer head start or more tables to line up cups on because when we went through, they were already getting backed up and running out, and we were toward the front of the pack.

When the course looped back around and we saw Harry Caray standing on the corner signaling our arrival back to the Field, it was such a relief, but also super exciting. Running through the concourse was fun, and a great way to finish the race. Hitting the mile 3 marker and with the finish line in sight, we both took off to cross the finish line… so we thought.

The finish line was the only part of the day I would have changed. Not too long after we took off at the mile marker, it started backing up terribly because the finisher chute was far too small to sustain the number of runners finishing. Add in the fact that many of the fun runners were finishing at the same time as us and there was really not enough room. From the time we stopped until we actually crossed the timing mat, it was almost six minutes. I’m still really proud of my time (especially for having not trained at all) and proud of Brendan for doing so well even when it got hard! 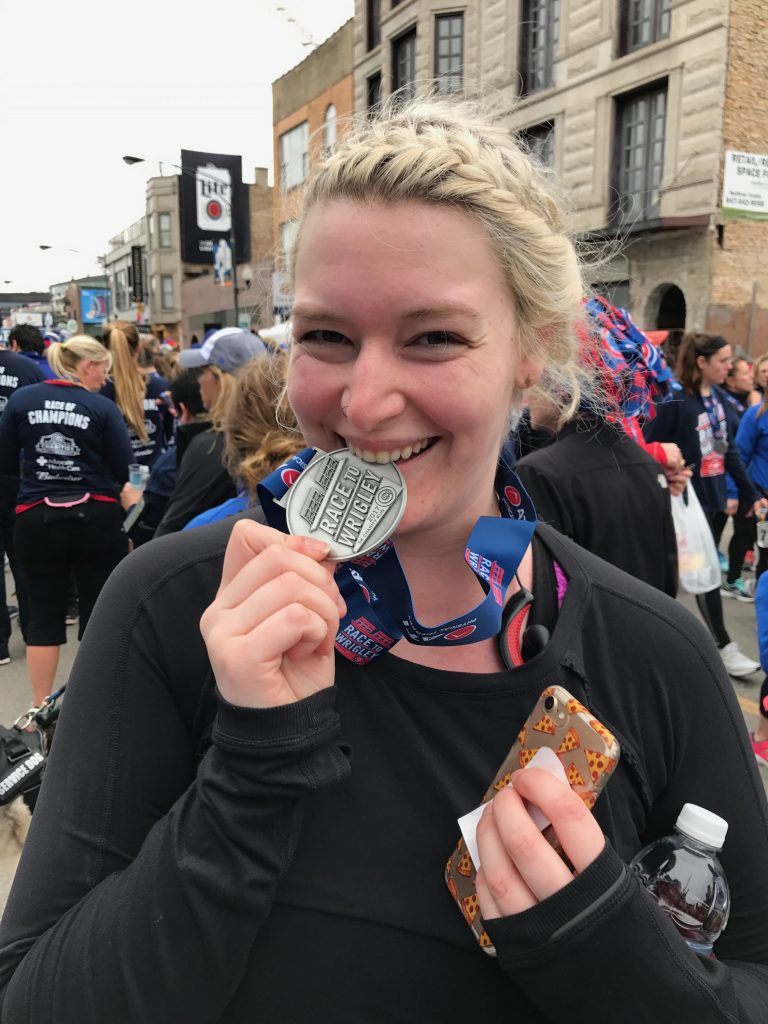 This race also helped me remember how much I love running. The camaraderie, the good ache after going hard, the joy of the finish line banana and happy volunteers giving out medals. Despite the finish line backup, it was a really great race, and I’m excited to Race to Wrigley again next year!