Toning Up With Designer Whey {spring into summer}

For summer, I obviously want to look toned and hot in my bikinis so I’ve started to really change my workout & recovery plan. It’s no secret that I LOVE Les Mills classes, especially BodySTEP and BodyPUMP. I started taking Step last summer and got into Pump last fall, but started taking it more seriously and increasing weights about three months ago. In these couple of months, I’ve seen crazy changes in my body structure and composition (clothes are smaller but weight is staying the same = muscle mass!) In order to keep building muscle and maintain proper fueling, I’ve started to use some Designer Whey products after class. 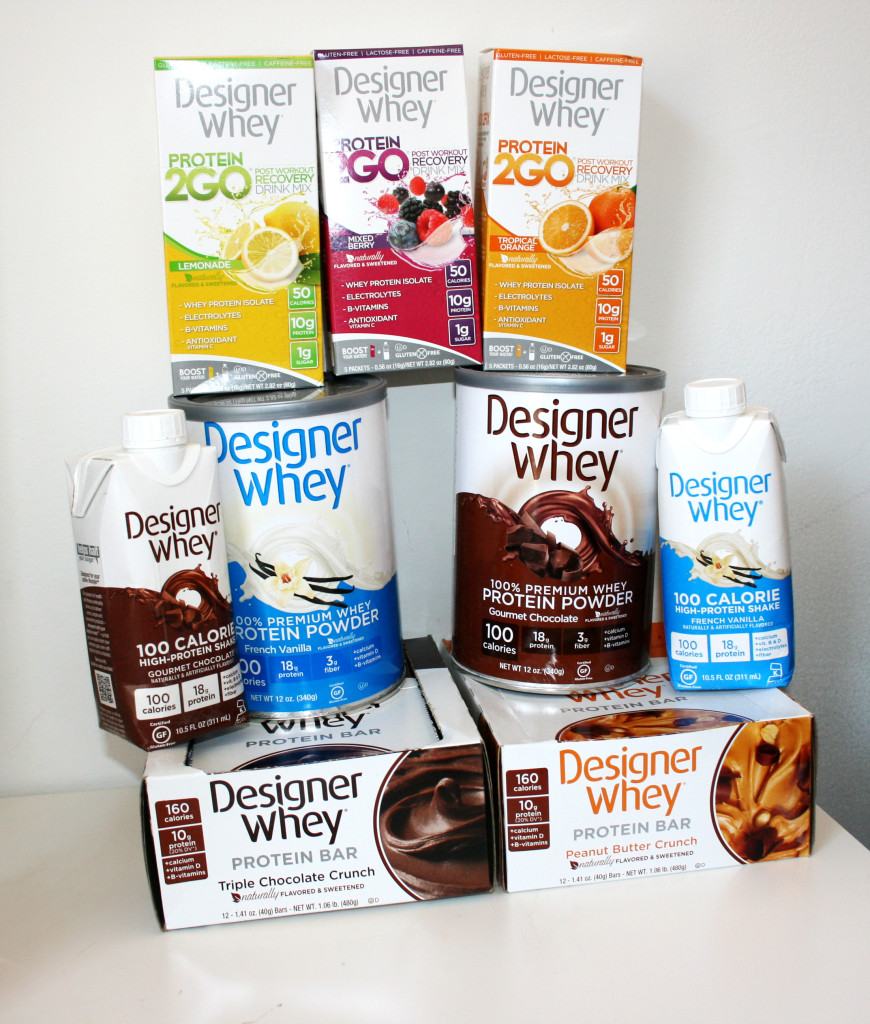 My absolute favorite product of theirs is the Protein 2Go post-workout recovery drink. It contains electrolytes for rehydrating after sweaty workouts along with 10 grams of protein for 1 gram of sugar. I just refill my water bottle after class, pour in the packet, and I’m good to go. Plus, these taste amazing – the mixed berry flavor tastes like Sweet Tarts, so it’s good to satiate my sweet tooth as well! Full disclosure, I expected these to taste chalky and powdery, but they’re not at all. They dissolve well in any bottle, not just blender bottles. 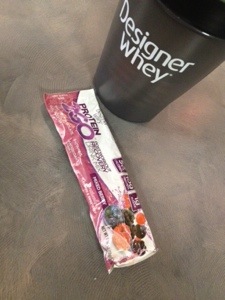 In addition to the Protein 2Go powders, I’m a huge fan of their protein bars. So many protein bars that I have tried have that chalky or cardboardy taste, but not these. The chocolate ones are great for an afternoon snack when my sweet tooth kicks in or I didn’t eat enough at lunch. (Probably best to stay away from these if you’re counting sugar grams, though.)

I’ve used several different kinds of protein powders over the last year or so and have always used them in smoothies. Since I would feel bad waking my roommates up at 7:30am with the blender, I’ve finally started to use my blender bottles for their intended purpose. I use a scoop of the powder, mix it with peanut butter and milk, and blend for a quick breakfast when I don’t want (or don’t have time for) cereal, eggs, or waffles.

What’s your favorite go-to workout recovery routine? How are you toning up for summer?

I was provided samples to review as a Girls Gone Sporty ambassador, but all opinions are my own.

Posted in Living, Personal, Work Out by
Desi

Even though I have been running for over a year and am training for my first triathlon, I still don’t think of myself as an athlete. Or at least, I didn’t until last week. Sure, I’m competitive, but not overly so. I love training and running, and while I do tend to build my weeks around workouts, I never thought it would feel overly earth-shattering if I had to take a break.

Turns out, it is kind of earth-shattering.

Sometime in mid-December, I was feeling a twinge in my knee. I just figured it was runner’s knee (even though, at the time, I was focusing much more on lifting and cross-training). Since it wasn’t constant and was never uncomfortable enough for me to stop, I didn’t pay a lot of attention to it, just pretended it wasn’t there. I taped both knees up for Tink (as I always do during races) and it was fine. When I came back and started doing my BodyPUMP classes (2-3 times a week), the pain was finally unbearable. It got so bad that I actually had to leave during last Monday’s class, and I haven’t been back to the gym since. 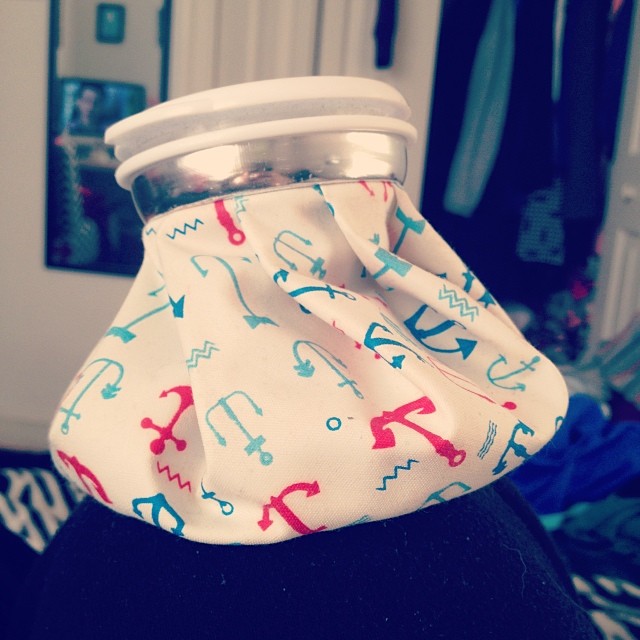 This is my life now.

I have a race this weekend, and even though I don’t typically feel the pain while running, I’m still scared. The plan was to go back today to my favorite BodySTEP class, but I’m nervous even of that now. The physical therapy exercises my doctor gave me are helping a little, but the pain got worse after I went in to see her. It’s just so frustrating to not be able to do something I want so badly to do. After years as a lazy couch potato, I finally just want to work out, and my body isn’t cooperating.

Yesterday, I was sitting in the bathroom on the phone with Sixx. I heard someone run past outside, doing laps around the concourse, and I just lost it.

So here I sit with ice on my knees, extra-large bottle of Ibuprofen at hand, just hoping for the best when I try to go to the gym tonight. 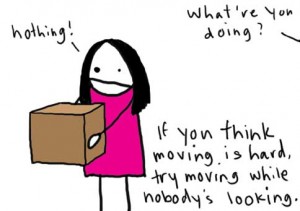 It’s no secret that I have been trying to move (basically since I moved south.) I was unhappy for a lot of reasons, I was upset about the lack of social scene (I’ve been here for 1.5 years and basically have two friends), and being eight hours from my closest family members has weighed on me much heavier than I expected. One of the places that I had been focusing my search was Northwest Ohio (where Sixx lives). It’s a beautiful area, has more sports/music jobs than even I realized, and is driving distance to both my parent’s house and my southern Ohio family.

A lot of things have changed in his life in the last two months (all of them I am SO THANKFUL for) and now he wants to move to a place we vacationed to a few years ago that I actively remember him saying, over and over, how much he hated. Regardless, he’s pretty set on moving there this month, and asked if I want to move with him.

I’m torn for a lot of reasons. Obviously, I’m not making any sudden movements without having a job and moving fund in place. It’s not a city I have seriously considered moving to (even though I loved and we have a lot of friends who are there,) and it’s much farther from my family. Despite what he thinks, jobs will probably be harder to find, or at least much more competitive, in our field. AND, I have been second guessing myself lately. Blame it on a gym high or the fact that I saw Dallas Buyers Club this weekend, but I’ve already been considering switching career paths into something fitness-related or back to HIV/AIDS research and activism (in my former life, I was an African Studies/Public Health student.) I’m also torn because the things that I like about my city now I REALLY like, enough to want to stay. (When he asked what those things were, my answer was “the gym… and my favorite gym teacher.”) Plus moving is super traumatic on me and even a cross-town move takes a lot out of me.

Life being what it is, I know this won’t happen – but May would be my “ideal” move month. My lease will be up, my free gym time will be up, and the season at work will be over. But obviously, life doesn’t ever work according to my plan. In the meantime, I’m trying to convince him to come squat at my place for a little while. I’m the one with a career, and I know we aren’t “together” right now… but we’ve been talking a lot about getting back together. Funny how growing up has changed him and made him realize everything he has lost.

So that’s what’s been on my mind lately. Lots of making plans that are months ahead. I’m sure I’m moving in 2014… I just need to figure out how to make it happen.

How I Brought in the New Year {flu friday} 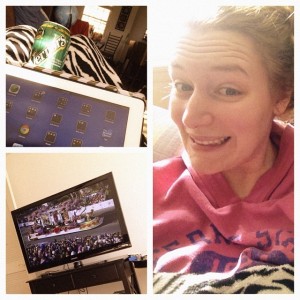 I woke up around 3am on New Year’s Eve with a sore throat. No matter, I thought, it’s just scratchy. I also had body aches, but I had gone to BodyPUMP two days in a row and really increased the weight, so I tried attributing it to that, ignoring the fact that a friend had confirmed flu and I had seen her all weekend. By the time I woke up at 7, I couldn’t ignore it anymore, and just kept thinking about how NP described the flu to me. I knew I had it and called her. I ended up getting on Tamiflu quickly and beating the worst of it (I even found a Tamiflu coupon! who knew) but I still spent two days doing nothing but laying down and drinking water and Vernor’s (and eating everything in sight – when I’m sick, I get much hungrier than normal. I’ve always been this way, it’s strange). At least I had a full day of Michigan sports on New Year’s. My roommates saw a new side of me during the Winter Classic. I threw things. It was not cute.

I was excited to start a run streak, to go to classes on my days off that I don’t ever get a chance to go to because of work, and do a major grocery shop to get my food right before Tink and Dietbet. Alas, it was not to be. But it’s okay! I will feel better soon and be back in the gym and while I may not have a 31 day active streak for January, 2014 can’t possibly get any worse than it started… right? 😉