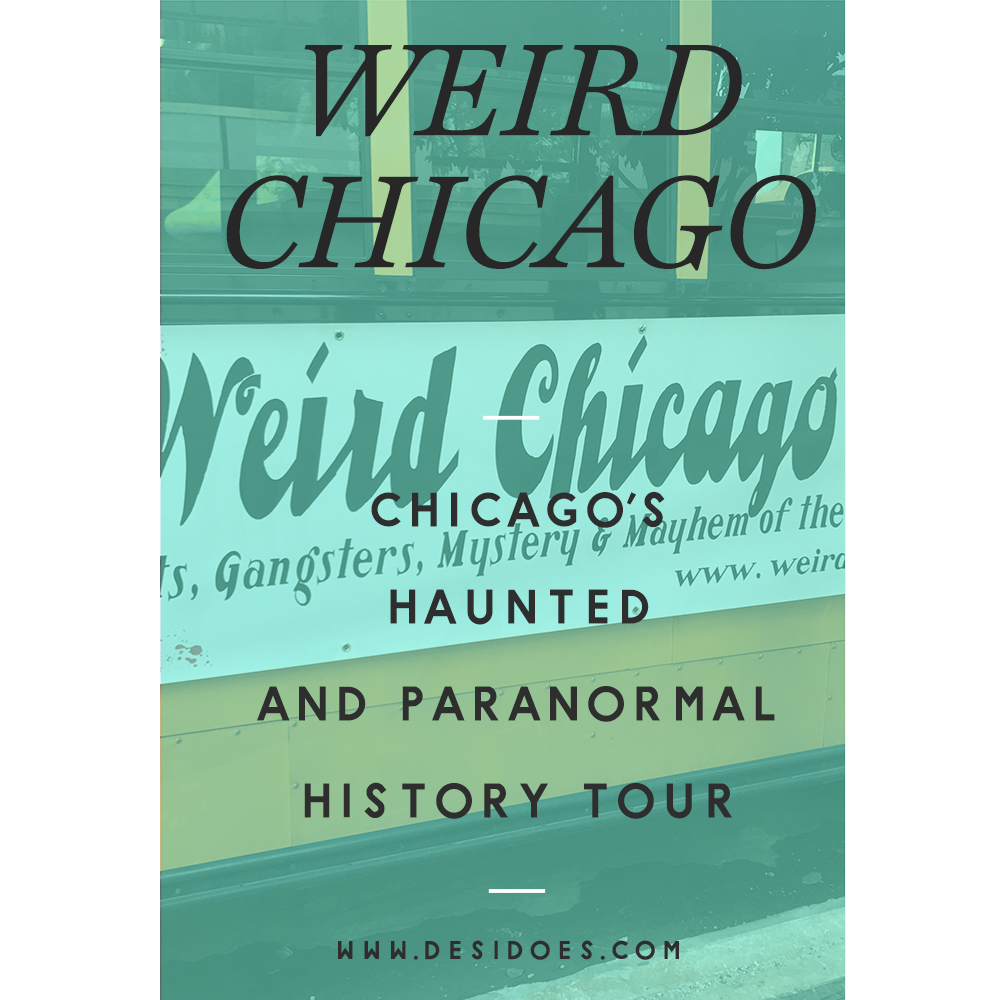 Weird Chicago provided free tickets, but all opinions are my own. 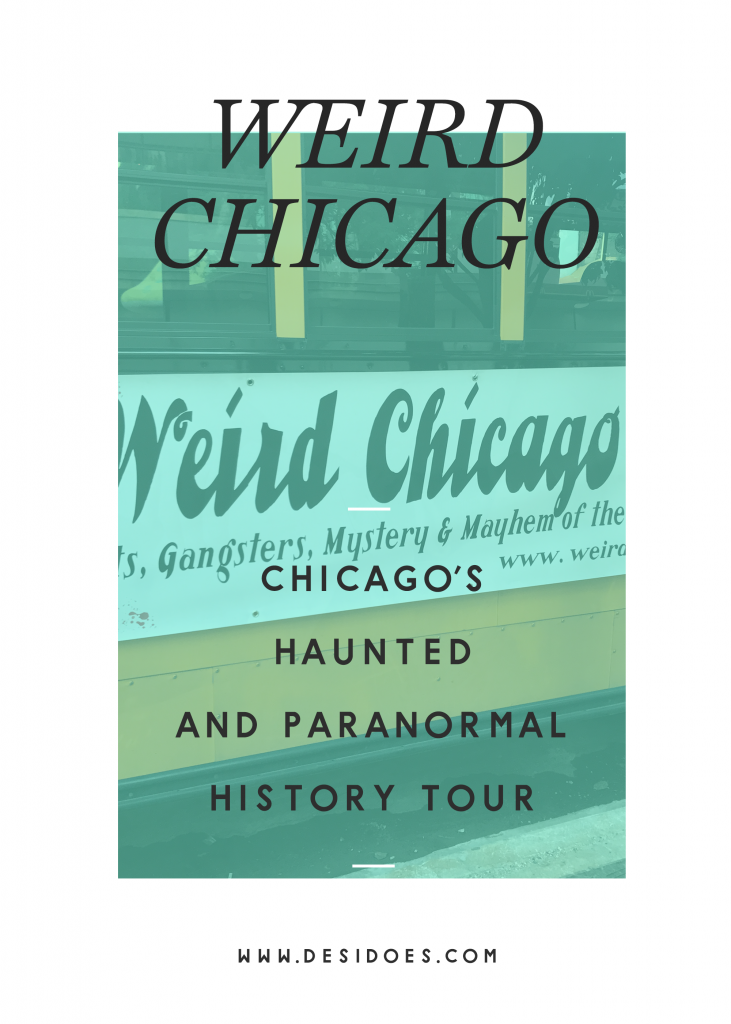 If you follow me on social media (or remember this post from last year’s gift guide), you probably know that I love true crime. After a recent dive into a new podcast (holla at my ladies!) and living with Dani, I’ve grown interested in paranormal phenomenon as well. I’d heard of Weird Chicago before, and I’ve always wanted to do a tour of Chicago’s biggest crime stories. (Honestly, the only one I’m really familiar with is the St. Valentine’s Day Massacre – mostly because the scene of it is across from Chicago Pizza and Oven Grinder Company.) I was really excited to see their Haunted History tour, and Dani and I jumped on the chance to go!

Our tour guide, Krystal, was energetic and engaging. She said that they can change up the spots they go based on the people on the tour and what’s going on in town. Since there weren’t any little kids on our tour, she added a stop where we could grab a drink at a bar – and it turned out it was a place I’d had an experience many years ago. One of the coolest parts of the trip was that Krystal gave us tips on the best way to shoot paranormal photography. She also asked if anyone was a medium or clairvoyant because some of the sites are very active and people who are sensitive have gotten sick in the past.

As a note – you can bring drinks and snacks on the bus, so I highly recommend that. (There’s a Walgreens and a McDonald’s near the pickup, if you need a quick place to run in.) 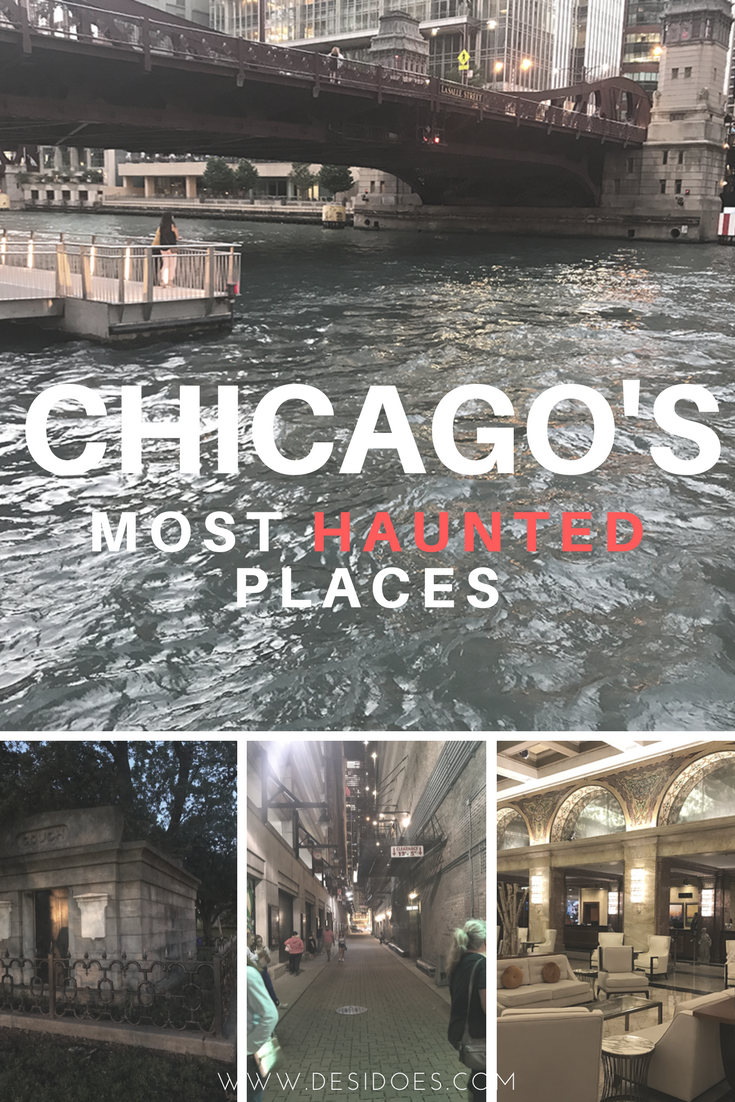 The first stop was on the Chicago Riverwalk, a beautiful paved walkway that’s super popular for tourists and locals. It’s also the site of the Eastland Disaster. Krystal told us the story, and I was shocked that I’d never heard of it before. In 1915, a company chartered this steamship (along with three others) to take their employees as a reward for great work. The ship’s infrastructure failed, resulting in a huge disaster: 220 people died, including many full families. (We were also there on the 102nd anniversary of the disaster, which was a coincidence.) People have reported seeing faces in the water and hearing cries for help – cries so real that emergency services are still called weekly for reports of drownings. 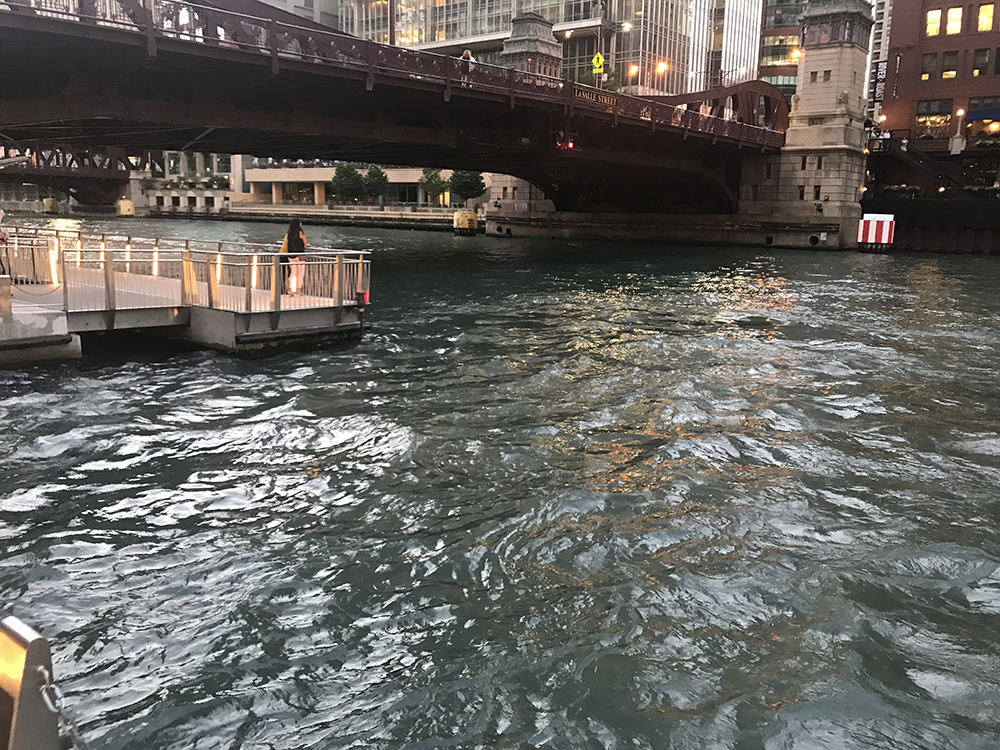 From there, we boarded back up on the bus and Krystal started telling us about how cemeteries (vs. graveyards) came about. She explained the history of how Chicago’s first cemetery came to be, and told us we were going there. I was really surprised when she told us what it was, because it’s a place I really love – Lincoln Park (including the Lincoln Park Zoo.)

It’s a great park now, so it was really surprising to learn that there are still thousands of bodies buried in the park. Even though people at the time were supposed to move their family’s remains after the city realized that having a burial site so near to the lake wasn’t going to work, many didn’t move them at all. There’s only one remnant left that symbolizes what the park used to be: the Couch Mausoleum. She told us that the most haunted place in Lincoln Park is actually the Zoo (which is one of my favorite places in Chicago!) 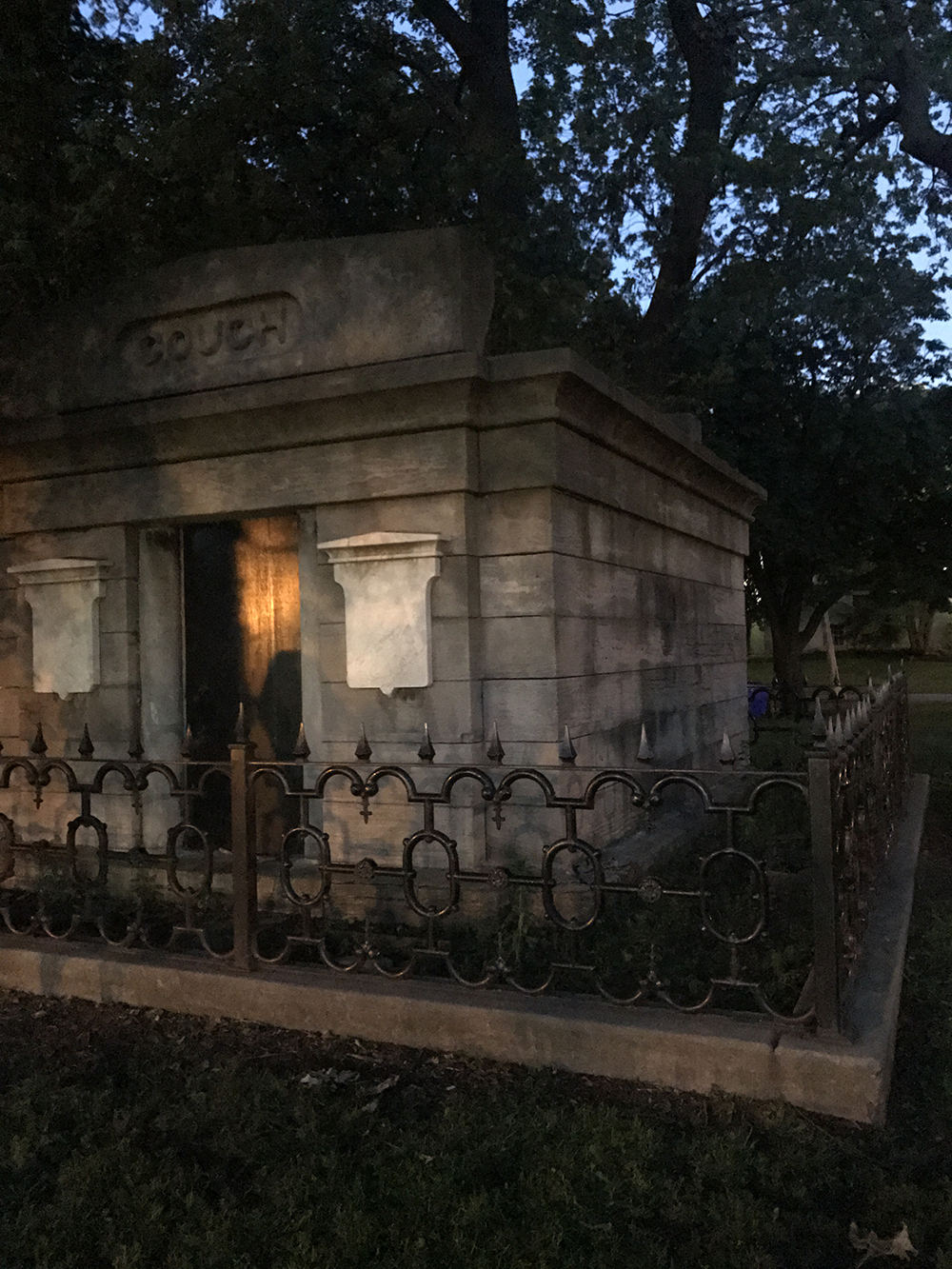 Since we were in Lincoln Park, I had a pretty good idea what the next stop would be, and I was right. Lincoln Park is just a skip and a jump from Chicago Pizza and Oven Grinder Company… across from the St. Valentine’s Day Massacre site. Even though I’m aware of it, I didn’t know that much about it. Krystal used volunteers from the group to illustrate all the people who were killed, and it was really interesting to hear the history and full story of what happened. There’s a retirement community next door, and one of the first floor apartments had so many complaints from residents that they would hear knocking and yelling constantly. I got very nauseous at this location, it was very weird. It came on quickly and I had to lean up against the fence to keep my strength. (One of the major characters in this story was a dog, so maybe that’s why I was so affected.) 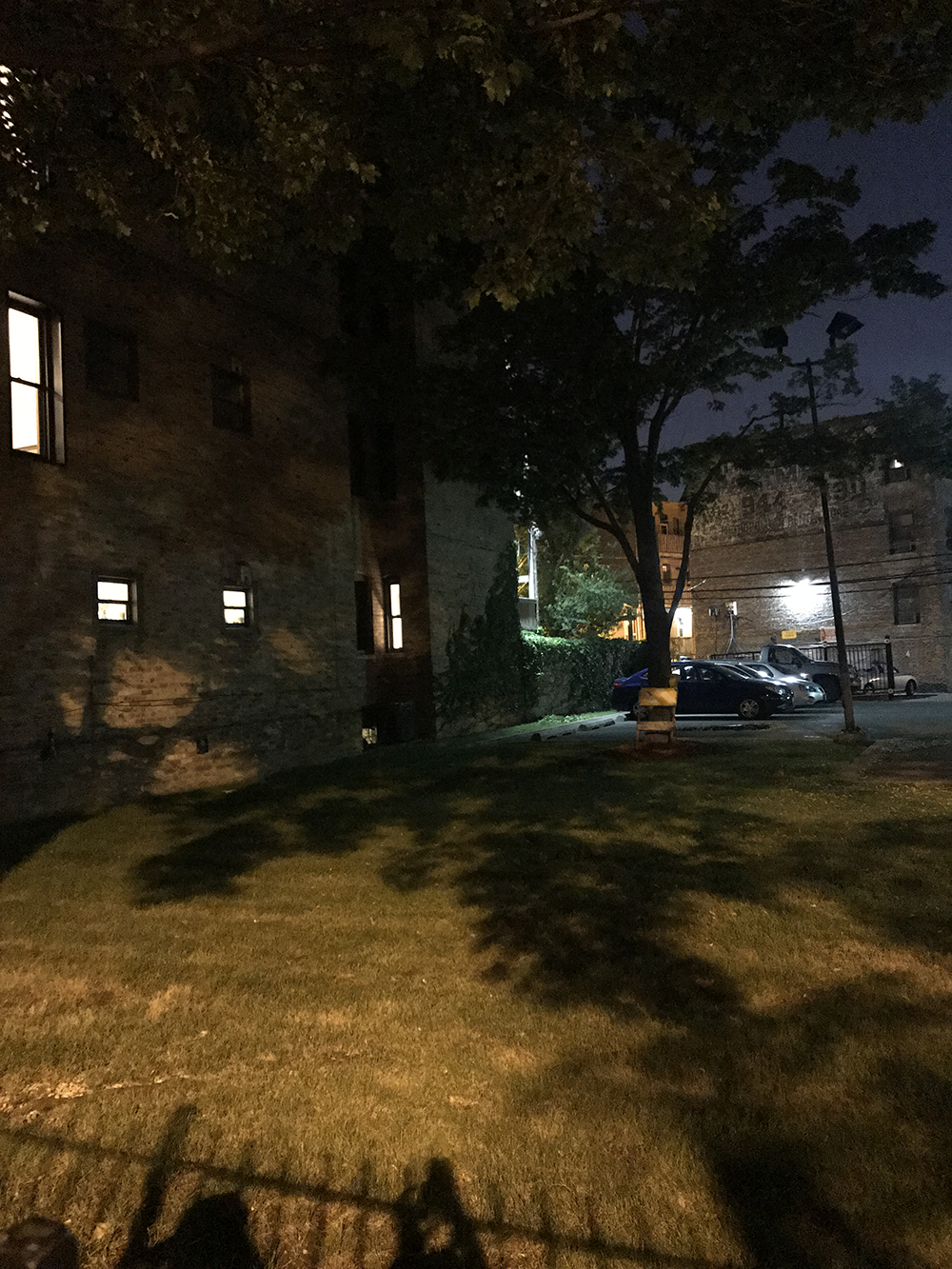 We headed downtown to the theater district to a nondescript alley by the Oriental Theater. Krystal told us it is referred to as Death Alley. In 1903, the Iroquois theater that was there at the time had a fire break out – not unusual at the time for theaters due to the heavy materials and lighting they used. It was billed as the world’s first “fireproof” theater, though, and they opened with a few important shortcuts taken – including no fire alarms and no fire escapes from the balcony. Hundreds of lives were lost (some due to fire, some due to people being pushed from the balcony out to the street) and today, it has a suicide rate of three times that of other places. 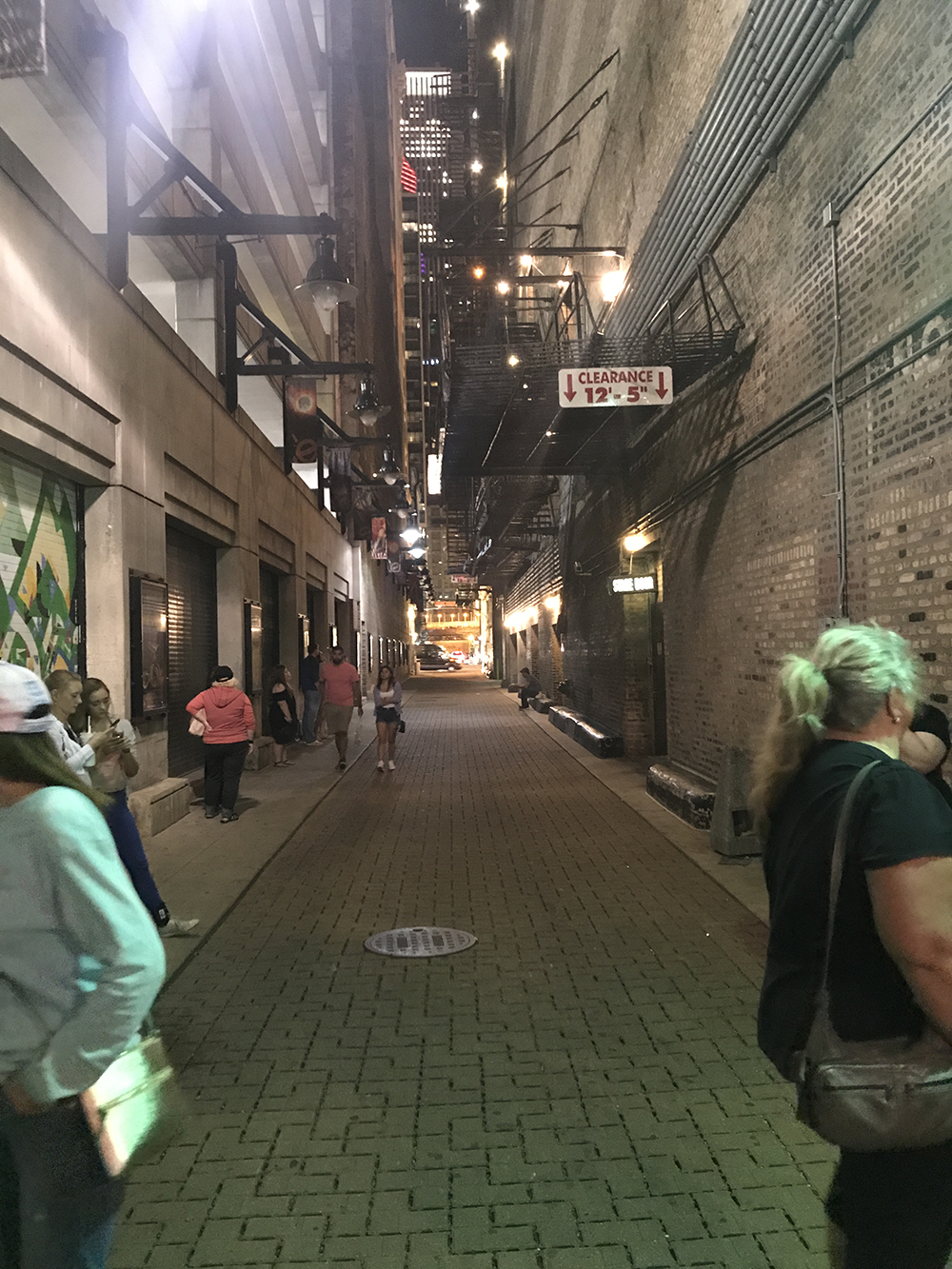 Finally, we wrapped up our tour at the Congress Hotel. I’ve actually stayed at the Congress Hotel once in 2009 for a conference. I was young, and “enjoying” the conference amenities, if you know what I mean, when I thought it would be a great idea to enter a stairwell that was marked “CLOSED – DO NOT ENTER.” It was so creepy. Cobwebs and dank smell that told you the door hadn’t been cracked for years. I was the only one in the stairwell, and I kept hearing scratches against the wall and a clanging sound on the steps. I hightailed it out of there, and I hadn’t thought about it again until we pulled up. Krystal told us stories about some of the ghosts that still live in the hotel (including one room that the hotel doesn’t rent out unless you request it – and even then, you’re waiting a year to get in) and it’s kind of cool to hear the backstory of some of these “residents.” 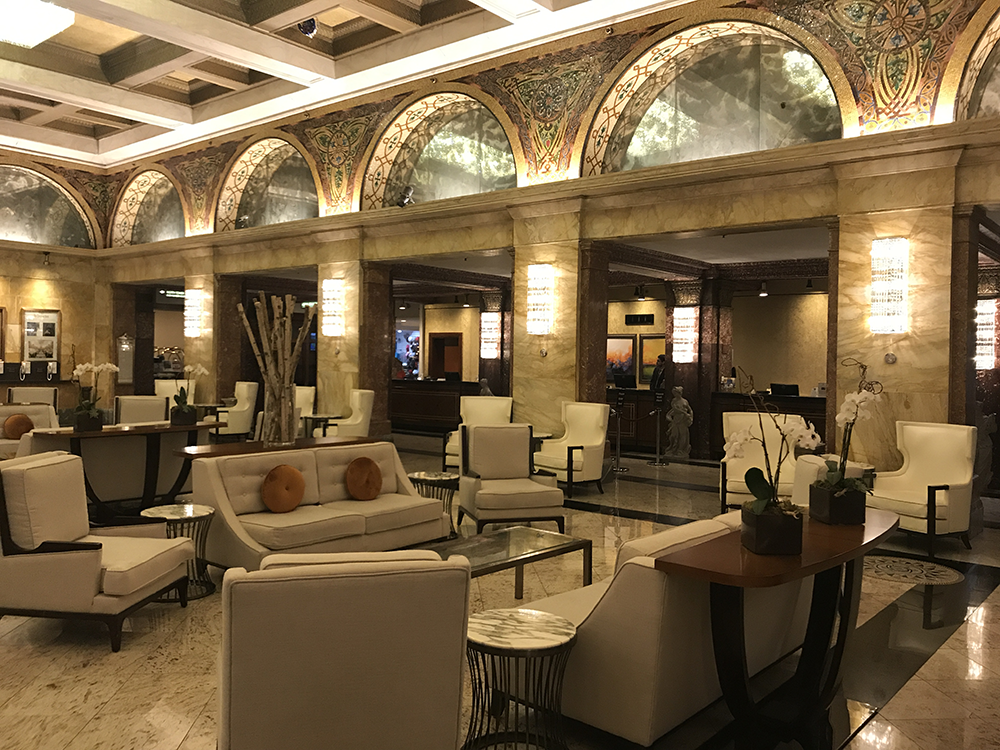 It was a really great experience and made me want to learn even more about the city’s history. If you’re a tourist, a transplant, or even if you’ve lived in Chicago your whole life, I highly recommend checking out one of Weird Chicago’s tours!