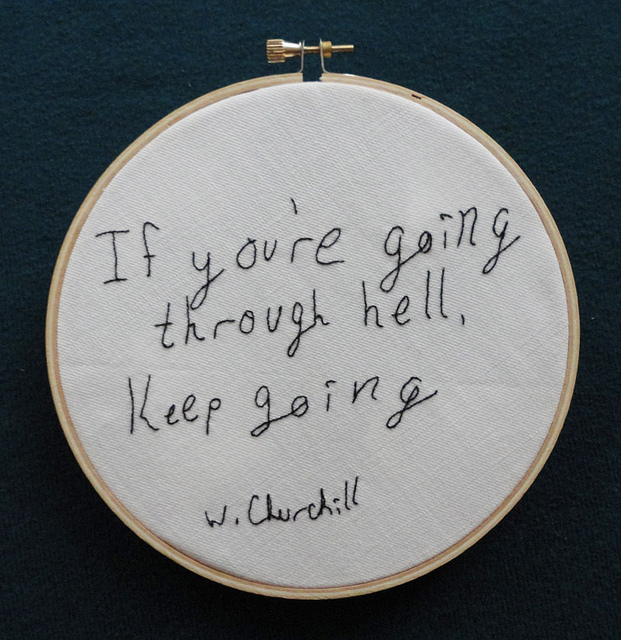 It has been truly another whirlwind month. After thinking that I had finished the transition process (and trust me, there’s no part of this summer that was NOT a transition) I was proven wrong again. I am typically a glass-half-empty kind of person. It’s just my nature, and I work very hard to overcome it and be the happy, bubbly girl you see here 😉

Earlier this month it felt like my world was falling apart and that I had no way to control it. I won’t go into the gritty details yet. But it’s been a crazy, chaotic, stressful month. It’s no secret that I have pretty severe panic disorder, so coupling that with the pessimism that lives in my head made it really tough to keep on keepin’ on.

I heard this amazing story from The Moth by Peter Sagal, one of my favorite NPR hosts, that really helped me feel like I could get through. He talks about his divorce and running Boston as a guide for a blind runner during the 2013 Marathon.

It’s funny to look back on when Sixx and I first met – he was really uptight, followed the rules to the letter, was totally the opposite of me. It took us years to get him to go with the flow. He teases me about this now when he tells me over and over to “let it go” and just breathe.

But it’s funny, because since this life-altering thing and getting through the initial few weeks of terror, I feel this sort of peace now. For once, I really believe when people say that things will be okay. (Basically because at this point if anything else goes wrong, I’m going to be just checked into the hospital :)) But there came a point where I made a decision to take charge and override the doubt and take a page from the book of The Hold Steady and stay positive.

Since I decided to do that, things have improved greatly. This girlfriend of mine has a saying she liked to trot out in college: “it’s all about the bounce back.” I’m hoping to bounce a little higher than I have before, and I think my attitude change is going to help me get there. And I have a lot of things to be happy about – Sixx comes home in a few weeks, I’m seeing my family this weekend. My mom bought me a really nice set of headphones. TV season is back in full effect.

And here – if that wasn’t enough positivity for your day, check out this cute little interview from a high school football player.

One thought on “High Anxiety & the Power of Staying Positive”