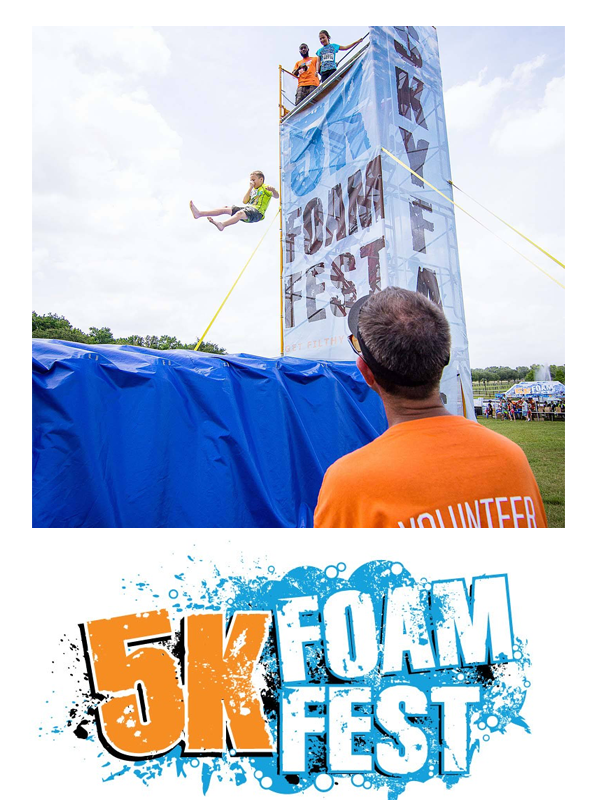 A few weeks ago, I drove over to Richmond to do the 5k Foam Fest! I registered pretty last minute since we were on call to work in case graduation got rained out, but the weekend was beautiful, so I took my chances and it paid off. The race was held in a state park and I should have expected to pay for parking, but that didn’t ease the sting of the $10 parking charge. One of my biggest pet peeves is paying for parking but I handed it over and wandered off. I was pretty lost as to where to go from the parking lot because it wasn’t signed very well, but following the herd served me well. Foam Fest and the park had set up hay ride wagons to drive people down to the start line which I thought was nice. It wasn’t all that far, but I knew at least getting on it that I wouldn’t get lost in the woods 🙂 Pickup was fast and easy. I didn’t bring anything in with me except my car key and driver’s license which were zipped safely in the pocket of my pants, but there was a gear check so if you’re going out to one later this summer, you don’t have to pack as light as I did. I didn’t even bring my phone in, so I unfortunately don’t have many pictures. I did some extremely brief research before the race trying to figure out exactly how dirty I would be and what I should keep in my car for post-race cleanup. This is what my trunk looked like: 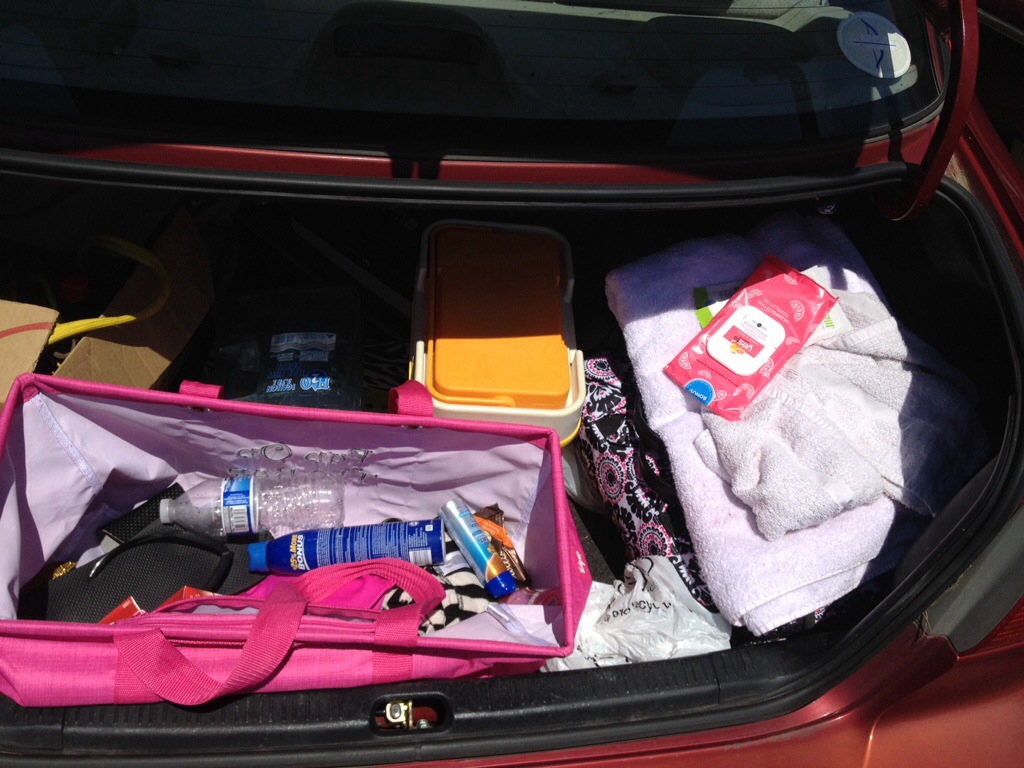 One body towel, two hand towels, two Shower Pills, a packet of face wipes, and then sundry other things like sunscreen, flip flops, clean clothes and snacks. Evidence of GROSS overpacking, but I like to be prepared. I noticed that the people coming out of the race were nowhere nearly as dirty as I’d read online so I started to feel pretty confident about being able to get a few more errands done post-race.

I arrived an hour before my scheduled heat, and they said that you could go out earlier, so I chose to go at 12:20. (I really recommend going as early in the day as you can.) The wave only had 20-30 people and we ran through the falling foam and we were off!

I can’t remember every one of the obstacles, but the first one was a bounce-house kind of thing filled with foam. There was also a set of up-and-over walls, a cargo rope climb, the “lily pad,” the death drop slide, and many other foamy things. The only one I elected to walk past was the mud pit – it wasn’t that I didn’t want to get dirty (I LOVE getting muddy,) it was that I was there by myself, and I noticed a LOT of people struggling to be pulled out of the muck by their friends. I was also wearing the only pair of running shoes I currently have, so I didn’t want them to fall victim to the pit. It looked really fun and in retrospect I regret not doing it, but c’est la vie. All the signs had very funny sayings on them and it was a very low-pressure introduction to obstacle racing – at the start, there were signs that said if an obstacle was too scary, you could walk around it. 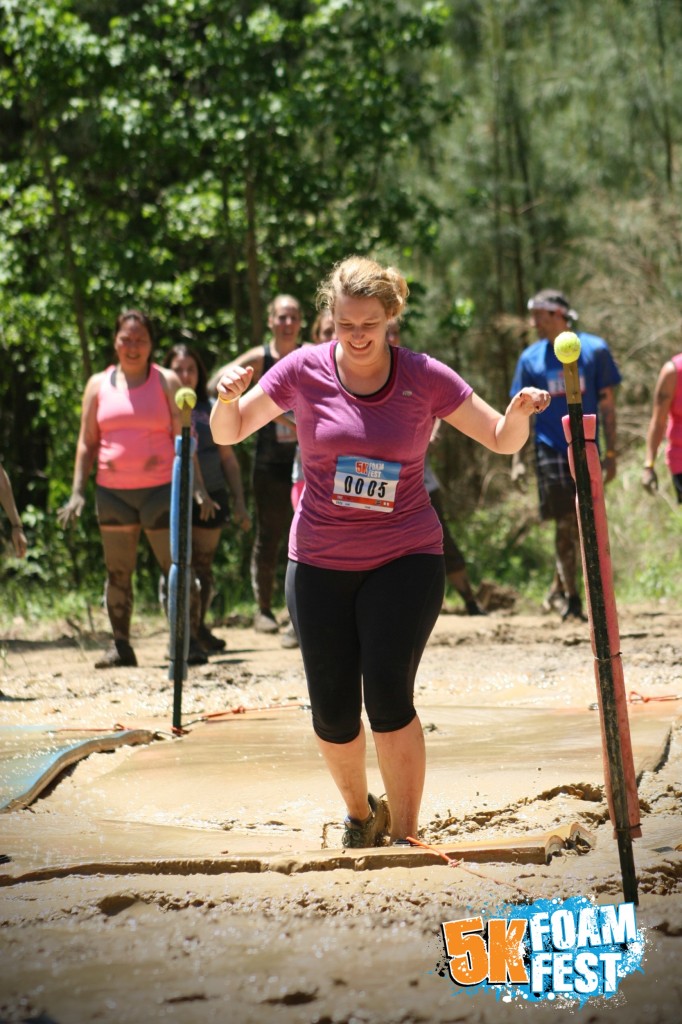 Throughout the race I found myself just doing instead of overthinking things – I’m sure I questioned if I would make it over those first walls, but I just did it anyway. I was halfway up the Death Drop slide before I thought, oh crap, do I really want to do this? Once you’re up you don’t have a choice. Throughout this whole fitness journey, I’ve had a lot of moments like this: I don’t realize how scary something might be until it’s already done, or until I don’t have a choice to turn back. Running half-marathons isn’t overwhelming – you just do it. Climbing obstacles isn’t scary- you’re strong enough to do it. (What a metaphor for life.)

It was untimed, but I know I made pretty good time since I was back in my car by 1:30, even after spending time in finisher’s village slamming my Mike’s Hard Lemonade.

Oh, and if you’re wondering – the Death Drop slide totally washes you clean, so even if you do get caked in mud throughout the course – you’re just wet at the end.

I definitely recommend this race – it’s a great intro to obstacle racing and race fee includes a (cotton) shirt, a Mike’s Hard at the end, free photos, and a medal. Totally worth it – if there’s one near you, sign up using my Foam Fanatics code and save $5 with FF2788.

Have you done any obstacle race fun runs? Any tips for runners preparing for them?

I was selected to participate in this program as a member of SweatPink. I received a free race entry for review, but all opinions are my own.