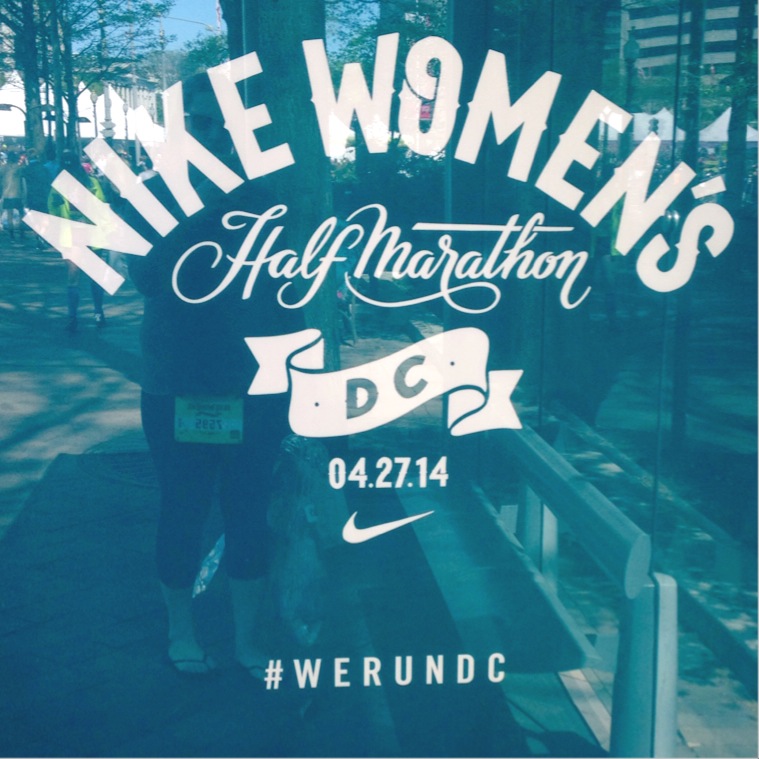 Holy crap you guys, what a weekend. On Saturday morning I headed up to Washington DC for Nike Women’s Half-Marathon weekend. I live roughly two hours south of the city, and it’s a really pretty drive when the sun is out, so I relaxed and listened to NPR and thought about my race plan.

All that relaxation went out the window when I got to Georgetown and tried to find parking. I’m not overly comfortable driving in big cities other than Chicago and by the time I found a place to turn around I had driven six miles past the Nike store. When I finally did get in to the store, I had a really horrible interaction with a couple of employees and that totally put a sour taste in my mouth. Over the last few weeks I had been contemplating not doing this race at all, and after my parking problems and that, I was really second guessing it. I left Nike empty-handed and went over to the empty packet pickup area and made it through without any wait. That morning I got to attend #NWHMBloggerBrunch hosted by Cat Lady Runs & Love Life Logistics, which I’ll post about later this week. Was a great time and made some new friends! Thank you to the great sponsors!

One friend from blogger brunch, xoxoLizza, had hotel problems so I invited her out to the boondocks to stay with me. It helped calm my nerves a lot that I had a friend with me for race day. I knew my race day outfit was going to be a game time decision, but I laid out all my options before I went to bed, and was (mostly) ready to go the next morning.

Four alarms going off at 4:30 was more disorienting than I remembered it being, and it was slow going, but I had my race morning breakfast of coffee, a banana, and my whole wheat muffin and we were up and out. Parking is free in DC on Sundays, so we found a meter spot near the Rosslyn metro and it worked out perfectly. We were in our start corral early with plenty of time to stretch and get comfortable. (And also freeze our buns off.) 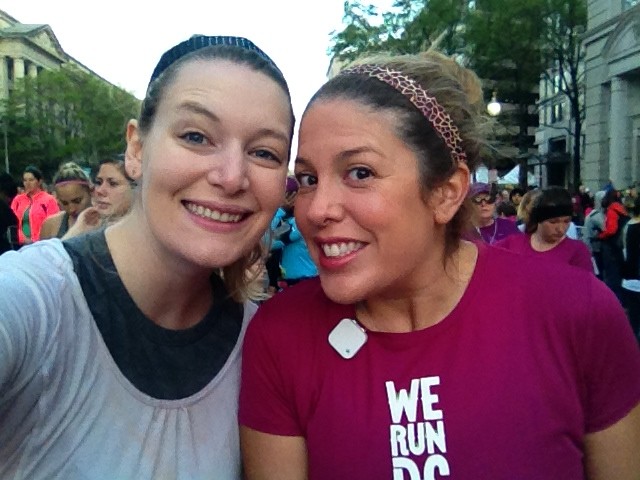 The first wave was off, there was a short delay, and then we started making our way up to the start line. I was ready to be stopped again, have time to fiddle with my Nike+ app, but nope – off we were crossing the red carpet. I did feel like there should have been at least one more break because by the time we reached the Capitol circle, I felt like a sardine.

Nike had great entertainment throughout the first half of the course, but after mile 6, I only remember seeing the Luna cheer station until mile 10. I was struggling badly. From reading recaps from last year’s runners, I knew this stretch was boring, but it really hit me hard. It was so bad that I considered doing two things: sitting down on the side of the road to cry and call my best friend, or cut through the park to shave off a little distance. (I did neither thing, though.) It was in this area that my app went TOTALLY haywire – it went from mile 11 to mile 12 to mile 13 without stopping. How strange. I only kept it on because the net time was right and I was very close to the bubble of my goal time. I knew I would PR, but I was really hoping for a certain time. Spectators had some HILARIOUS signs – I wish I could remember them or taken pictures. They had me rolling.

Even though I run with my own gel chews, stupid me grabbed some at the shot block station anyway. I thought I had lemon lime in my hand, which I have used before without issue, but I got tropical punch. I almost had a Lindsay Patton-Carson moment. Thank GOD it held off until I was through the finisher’s chute, but it hit me FAST and I was trampling over spectators in search of a porta potty. (Which then did not have any toilet paper. Luckily I got some kleenex from a med station on the course and shoved them in my bra.) Between my chews, oranges on the course, and the chocolate mile and Luna stops, I have never felt so full during a race. I saved the Luna for later (but did make the mistake of eating a chocolate thinking there would be water near… there was not) but I was really disappointed at some of the water stops. One was completely out of full cups and we had to wait in line for them to slowly replenish, and two stops were out of Nuun when I got there. This shouldn’t matter that much to me as I don’t train with Nuun, but I definitely appreciated it being there on the course because it made me much less salty, and I’m a planner – if you tell me to expect something, it better be there, or it’s going to mess with my mojo. 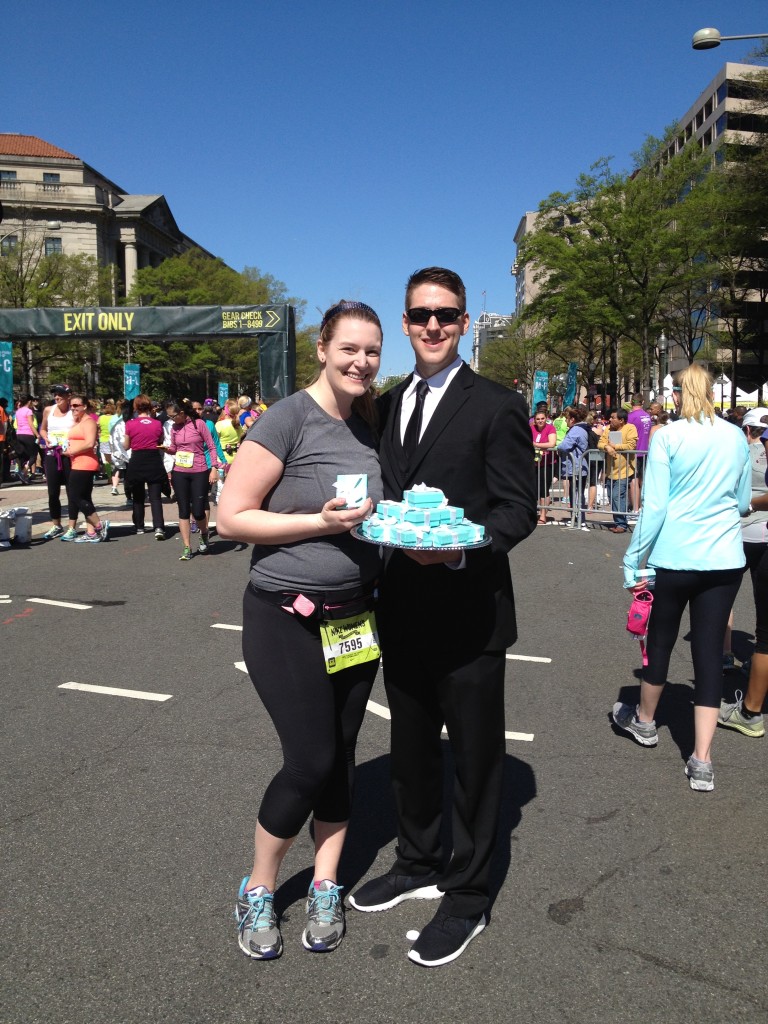 Anyway, I got my PR with a finish time of 2:57:30. I almost let it go because my foot started cramping up like it did in Cleveland (and like it hasn’t since Cleveland, of course.) I pushed hard. Instead of using a playlist, I had just put my phone on shuffle, and toward the end “One Headlight” by the Wallflowers really spoke to me: she ran until she’s out of breath, she ran until there’s nothing left. That’s exactly how I felt as I crossed the finish (I’m surprised I even had it in me to smile for photos with the ROTC men.) As soon as I realized I was going to PR, I started sobbing. Even though I haven’t been running as much and instead focusing on strength training, I worked hard for this one. I waited through the extremely disorganized food area, got sardined through the finisher’s tent (am I the only one who felt that family members should NOT have been allowed in there?) and made a beeline for that porta potty. 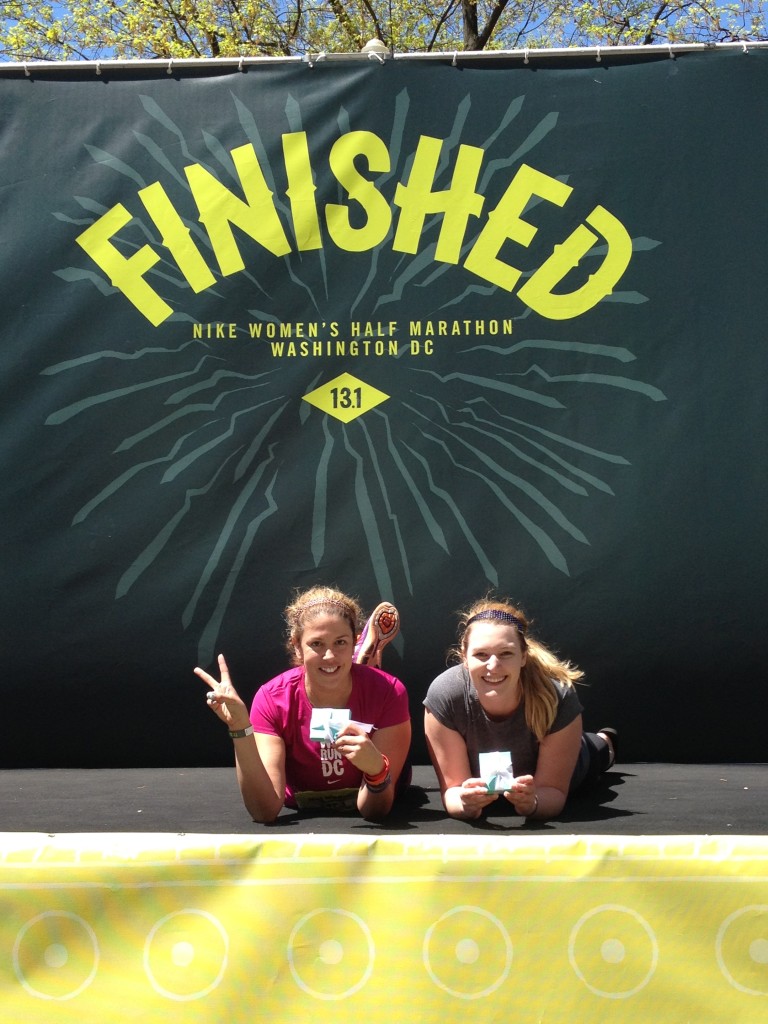 Once I cleaned up I found an info booth and led this way: “I want to see Kermit. Where is the American History Museum?” Guarantee that guy didn’t expect that was a question he would answer that day. I made my way to the Smithsonian (walking two blocks out of the way) and again asked the info desk girl “where is Kermit?”

“He’s actually not out right now…” My face must have fallen eighteen stories. Literally one of the things that carried me through the hard stretch was knowing I would get to see that little green gentleman at the end. “…but we have Miss Piggy!” Okay. That’s fine. A year ago she would not have been a sufficient substitute, but after seeing Muppets Most Wanted I’ve come to embrace my inner Piggy. Nobody messes with our frogs. 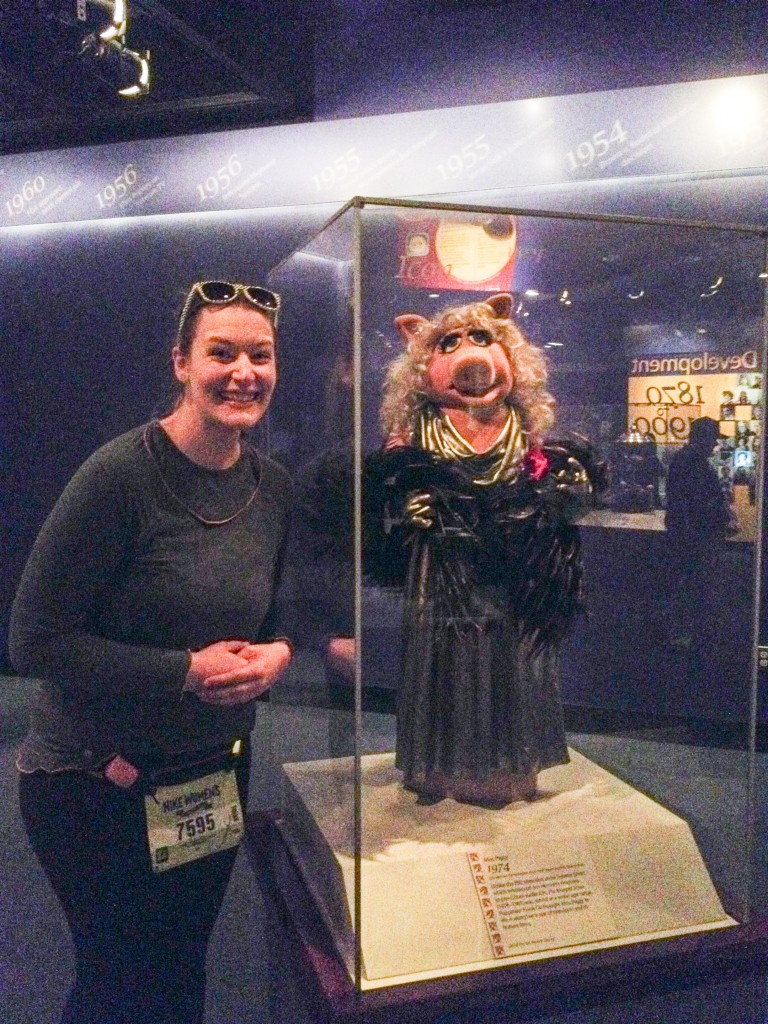 Overall, even my little hater heart loved this race. It takes a LOT to make me feel this way, especially when I had been second guessing so much. There are certainly things I would complain about (no water by the chocolate stops, no entertainment where it was needed most, not being directed to a med tent at the finish when I asked for one, the med tent being out of ice packs when I got there, etc.) but I did have a great time and will be entering the lottery for San Francisco!