5 Michigan Beers to Drink This Summer 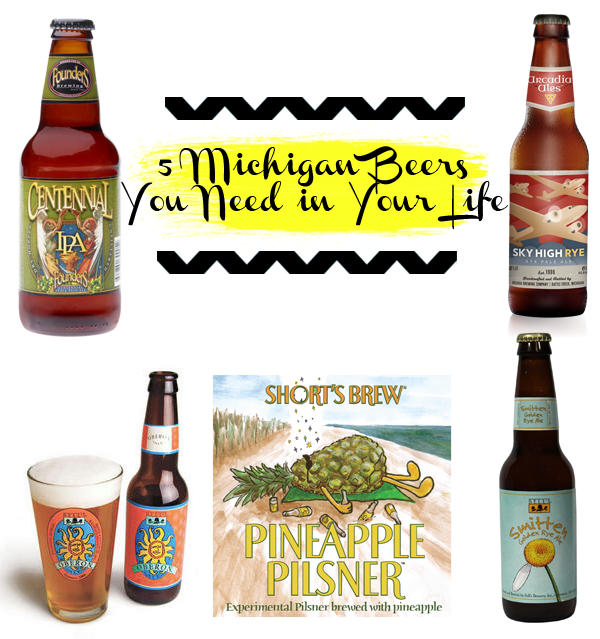 Look at that, a Michigan post appears and it’s not a Monday 😉 The longer I live outside the mitten, the more snobby I realize I am about beer. A few weeks ago, a friend and I went out for happy hour. When they read us the beer list and it was all local Virginia beer, I looked at him and said “we have got to get out of here.” It’s not that these beers aren’t good…. there’s just nothing as good as my favorite northern brews. If you’re looking for some summer refreshments or heading to the Great Lakes State this summer, here are a few Michigan beers to look out for:

Bell’s Oberon – the essential summer beer. Pack a case of this and bring it to the beach, the pool, outdoor festivals, whatever. Only acceptable when served in a glass with an orange slice. I’m not typically a diva about how I take my beer and usually drink from the bottle (the first time I went to a bar in Charlottesville and was given a glass to pour it into, I was confused) but this is the only acceptable way to drink an Oberon.

Bell’s Smitten – I’ve covered this find before: Smitten was a new release this year, and it immediately became my favorite springtime American pale ale. When I thought that winter was never going to end and the summer beers would never come to us, this citrus-tinged, hoppy beauty was like a lighthouse beacon signaling the end was near. The Bell’s cafe is also exceptional if you ever find yourself in Kalamazoo.

Founder’s Centennial – I love IPA’s, and this is one of my favorites. It’s sweeter and more citrusy than most, which makes it great for summer. Founder’s is becoming more well known now for their KBS, but the All Day IPA is worth a drink too (and I will plead the fifth about having a Breakfast Stout the morning after a very very late night.)

Short’s Pineapple Pilsner – this is the only beer that I can’t find in Virginia and I am not happy about it. Short’s was founded by a guy who wanted to experiment with crazy beer flavors and combinations, and he has really hit on it with his beers. They don’t make my favorite anymore (a PB&J ale) but I had a taste of this interesting brew before I moved and loved it.

Arcadia Sky High Rye – this brewery was the only saving grace Battle Creek had. My girlfriend and I would hit this place after concerts, meetings, late nights in the office, and Fridays. Sky High Rye, a pale ale, was my first favorite, quickly joined by Whitsun, Jaw Jacker, Cereal Killer and Nut Brown Ale. If you ever do have the misfortune of finding yourself in BC, eat here. The food was out of this world, too.