Oil Pulling: not as gross as it sounds {fitness friday} 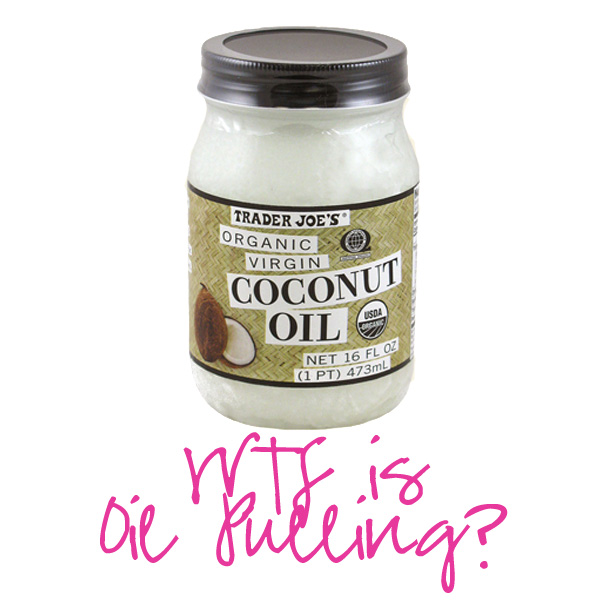 Oil pulling is everywhere right now, but it’s been around forever. If you have managed to escape hearing about it, oil pulling (or oil swishing) is where you put a tablespoon of some type of oil – coconut is popular, along with sesame – in your mouth and “pull” it through your teeth for 10-20 minutes. Touted benefits range from whiter teeth and better breath to improved allergy problems and reduced migraines. I’ve been oil pulling for about two weeks, and I have seen some benefits from it. Common sense should tell you I am neither a dentist nor a doctor, so my advice is of course not gospel.

I use Trader Joe’s coconut oil. Unrefined, virgin oil is what is recommended. In the morning I get up, scoop a tablespoon into my mouth, and swish. It’s awkward at first, but the oil melts pretty quickly and it gets a lot easier. It’s basically just coconut-flavored mouthwash at that point. For the next 20 minutes I shower and start to do my hair and when the time is up, I spit it in the trash or in an empty beer bottle so I don’t clog any drains. Simple and painless. Then I brush my teeth. At night, I just brush, then floss, and then rinse with normal mouthwash.

My teeth were whiter in the first few days, which happens when the “oil and enzymes work together to break down, bind, and lift some of the stains from teeth.” It’s hard for me to really buy into attributing other less-measurable benefits strictly to pulling, but I have noticed the gunk in my sinus cavity has been breaking up and I’ve been less stuffed up since I started. I haven’t found the zen-like trance state that some bloggers talk about, but maybe it’s because I keep busy while I’m doing it vs. getting back in bed or sitting down with the paper. One of the benefits I am really interested in, and the reason I started doing this, is that it’s rumored to stop and sometimes reverse cavities. Since Root Canal 2012, I’ve been researching crazy homeopathic ways to keep myself from having to go through that ever again. Obviously I won’t know if it does help until my next cleaning in August, so it’s a long way off, but here’s hoping.

I do have a crown on one of my teeth, and I read some posts and articles that discourage people from oil pulling if you have a crown. I asked my dentist if it would be okay, and he told me there should be no reason that it would effect my crown. If you have anything weird happening in your mouth, I would recommend checking with your dentist or orthodontist just to be safe. (I’ve not seen anything saying that it’s bad for people with braces other than the whitening effect might look weird.)

So that’s my experience so far with oil pulling. When I run out of coconut oil, I am going to try with sesame oil next, but I really like the taste of coconut so I’m happy with it. You can read more scientific articles on Huffington Post, Jezebel, and the blog I cited earlier which is written by an ER doc.

Have you tried oil pulling? What are your thoughts on it?

2 thoughts on “Oil Pulling: not as gross as it sounds {fitness friday}”