Last Saturday I ran the (snow-delayed) Wine Lovers 5k at Cardinal Point Vineyards. I had been really looking forward to the race because we’d had a pretty warm winter, I thought we’d have a great sunny race day on February 15… and then we got dumped on with 17 inches of snow. I’m sure rescheduling events is a hard decision, but Corkscrew Racing definitely made the right decision when they pushed the race back two weeks to March 1. 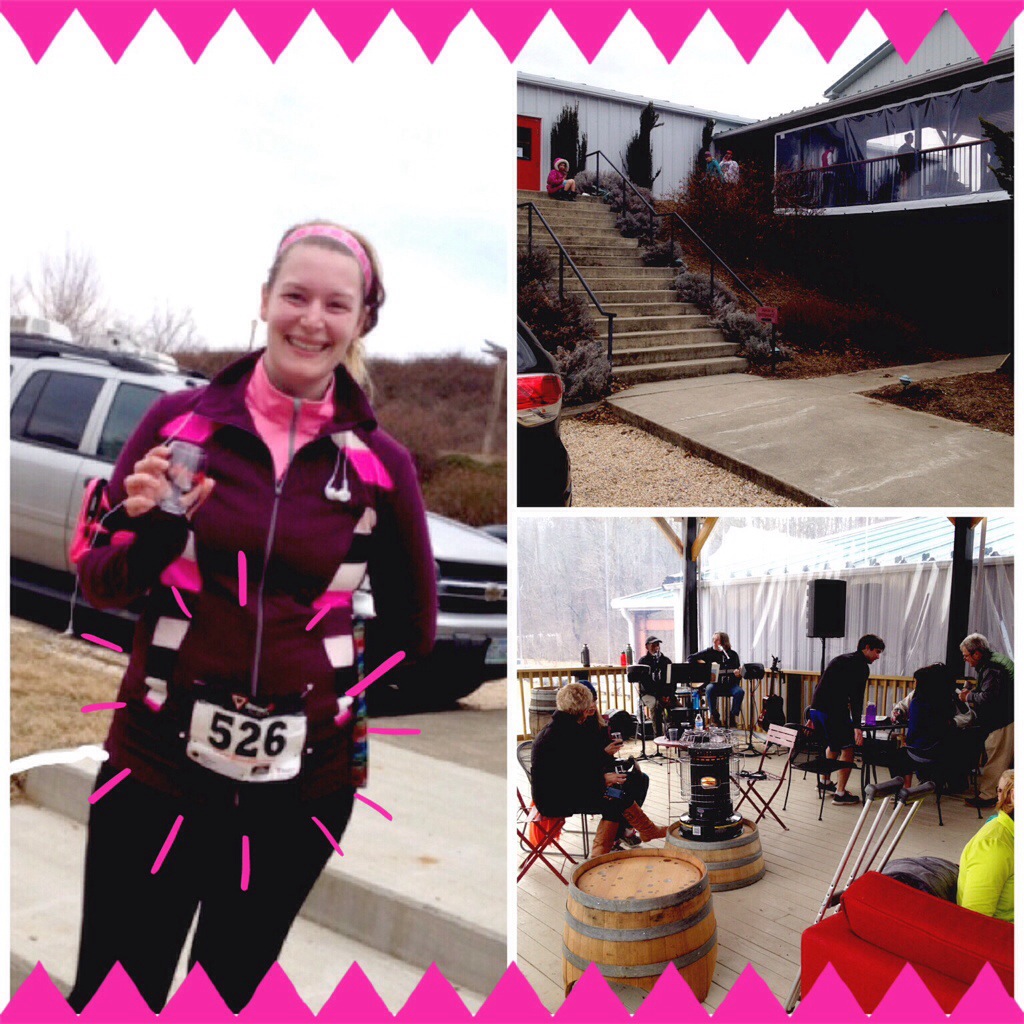 So on Saturday morning I got up bright and early, put on all the layers I could find, and headed down the road to Afton, VA. Even though I’ve lived around here for almost two years, I have done almost no exploring, so it was cool to see new parts of the area. It is really pretty out here, I just never see much of it from the highway on the drive to Ohio.

Anyway, I thought this race was very well organized from start to finish. I felt they very effectively communicated the delay to runners, sending out multiple e-mails and posting to social media. Packet pickup, though in a small area, was not congested or overwhelming. The patio had ample room for relaxing pre-race, including heaters by which I warmed my bum before we took off.

Eventually, they lined us up and we were off! The race wasn’t chip timed, and as is usually my goal when running locally: I just didn’t want to be last. It was an out-and-back course with a water stop at the turn around, and had it been just a little sunnier, it would have been so picturesque. After lamenting the uphill incline for the first mile, it eventually clicked that that also meant I would be going downhill on the way back, and that helped me to run just a little bit faster.

What also helped me to run faster were my lungs. I have asthma, and I’ve never run in weather that cold. It was somewhere in the 20’s through the whole race. My lungs were on fire, but I realized that they were on fire only when I would take walk breaks. When it got too bad, I’d pick up the pace again. Things like this are really helping me become a smarter/more effective runner.

I finished in 37:14 and headed up for my wine tasting and enjoyed some of the music before I had to head back in for work.

I really have no complaints at all about this race! The absolute best part was how dog-friendly it was. It’s no secret that I love dogs, and it was nice to see them curled up in the winery and also out with their people on the course. I’m excited to put Cardinal Point on my list of summertime hangouts. It was awesome and I can’t wait for the next Corkscrew Racing event!