A Little Bit of Pixie Dust {tinkerbell half marathon recap}

It has taken me awhile to even really know where to start talking about Tinker Bell Half Marathon because honestly – I did not have a good experience at all. I wanted to sit on it for a few days to make sure that I wasn’t writing and reacting out of emotion but the longer I think about it, the less my feelings change. I’m not sure if it was the fact that they were just coming from WDW Marathon weekend the prior week, but everything felt sort of disorganized to me. I am really going to try to be positive, but here’s my take on the runDisney experience: 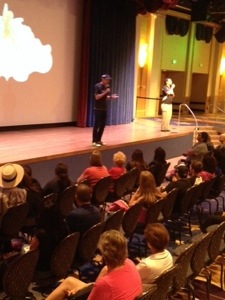 The expo was the first thing to disappoint me. I had high hopes thinking it would be packed full of vendors offering great discounts like the Flying Pig expo.. it was definitely not. I liked the talks they had by Jeff Galloway and the other speakers. After I made the first pass through everything, the only place I really wanted to stop was KT Tape. I can tape myself of course, but I had some questions about the knee app I use and wanted to watch a trainer do it. I expected a long wait, but I didn’t expect to be standing in line for awhile before a Disney employee told me I had to purchase there in order to get taped. I had some rolls in the hotel room, so decided to just go back later. After a few more rounds with the Disney employees manning that station I never ended up getting taped. Oh well. I was not impressed by any of the runDisney Tink merchandise either. I had gone in fully prepared to drop at least $200 on new gear and I walked out of the expo without anything. It was also set up in a confusing way. We also didn’t get safety pins in our packets, which wasn’t a problem for me since I was wearing my Fitletic race belt, but NP had to find some at bag check on race morning. 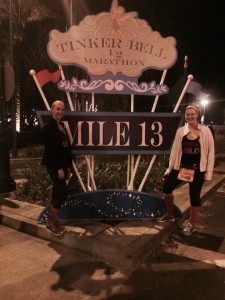 Sunday morning I got up, slithered into my race outfit, and, armed with coffee, a Luna bar and banana, we set out to get on the shuttles. I know Anaheim pretty well and knew it would have been shorter to walk to the start than to get on the bus, but walking even an extra half mile seemed impossible at 4am. We found some safety pins and made our way to the last corral (since we had been told we could switch corrals at the expo, neither of us submitted times), trying to push forward as much as possible. Around 5:45ish, we crossed the start and were on our way. I HATED that we immediately started going up hills. That made me lose NP in the first mile, and I figured I’d be able to hang with her at least until we got out of the parks. I was really nervous about being swept for some reason (even though at no point was I at risk of it.) Before I knew it, we were in the parks – I’m not even sure how we got there. I do know that there were some parts that were so narrow and crowded we had no choice but to walk, which was frustrating. I guess it’s better at WDW races because it’s bigger. I had been unsure if I wanted to stop for characters, so I passed the first few until we got to Cars Land. I posed for the Marathon Foto photographer and got back underway. Cars Land was so beautiful. The race itself wasn’t so bad – the course only felt boring for about two miles, and I loved all the cast members backstage who were cheering us on. I had also chosen not to run with my camera after deciding not to stop for characters. In the end I do wish I had stopped for Merida as well, but c’est la vie. I was wearing my Happy Birthday button as I was celebrating my 27th birthday that day, and it made me so happy when other runners or cast members would say “happy birthday” to me! 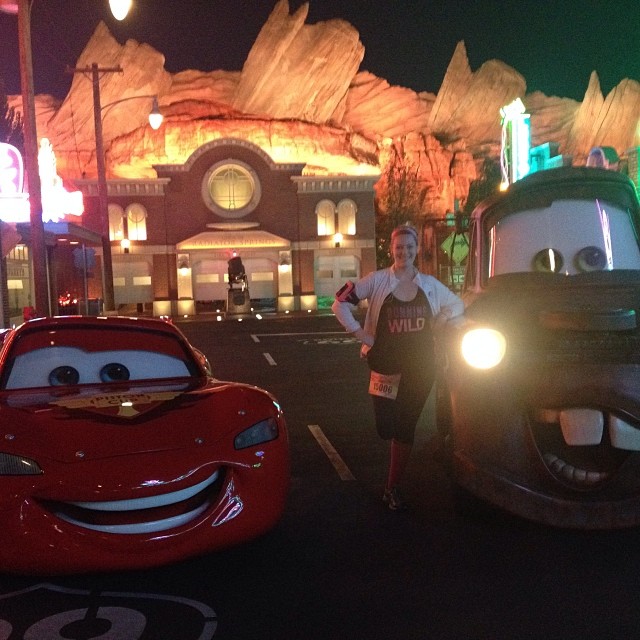 I was chugging along, not really sure what my pace was because I had set my Nike+ pretty long before we started running. Since runDisney had runner tracking, I had them sent to myself and figured that I could adjust pace once my first split came through. My first split, at 5k, said 1:28:41, pace 28:33. I was only kind of mad at that point because I figured no matter what, I would probably PR, and I should just keep on trucking. They never corrected but they did start thankfully decreasing rapidly. For the first time in my life, I started feeling like I was going to have some digestive distress during the race. It held off, THANKFULLY, but I was on stormy seas for awhile.

As far as fuel, I thought they definitely had enough water stops, but wish they would have had one more GU station or that it had been a little earlier. I always run with my chews of course, but there were parts of the run where I felt like I could use a little something more.

Typically the mid-stretch of the race (miles 7-10) have always the hardest for me, but not this time. This time I struggled through the last 5k and had a husband and wife team I was using to pace and motivate me. They were not going to beat me across the finish line.

They didn’t, which I was thankful to at least have beaten them, and I was so ready for the medal. I felt pretty good about the race and when I went to grab my medal, the girl started shouting at people around us “KEEP GOING, THERE ARE MORE MEDALS BEHIND ME.” I found that kind of rude. There were a layer of three medal volunteers and I actually made it all the way through all of them without getting a medal. -_- I looped back around and grabbed it and found NP pretty quickly. She had almost beaten her goal time of 2:30, but crushed her last race time so I was proud of her. My timing chip never updated, and my time was reported as 3:49:13. I have no idea what it actually was (it has since updated on the runDisney site, but I’m still pretty sure it’s wrong, since my Nike+ app was at 3:03 when I finally turned it off.)

I did really like the organization and layout of the medical tent at the finish line. I didn’t feel like I was swimming upstream, it was very adequately staffed, and the girl who wrapped ice around my knee was so sweet. I like the idea of the food boxes, but felt like it took forever to walk over to them after getting through the photo line. (Which I’m very glad I stood in because there were almost no photos of me from the course, and they lost my Cars Land photo.) 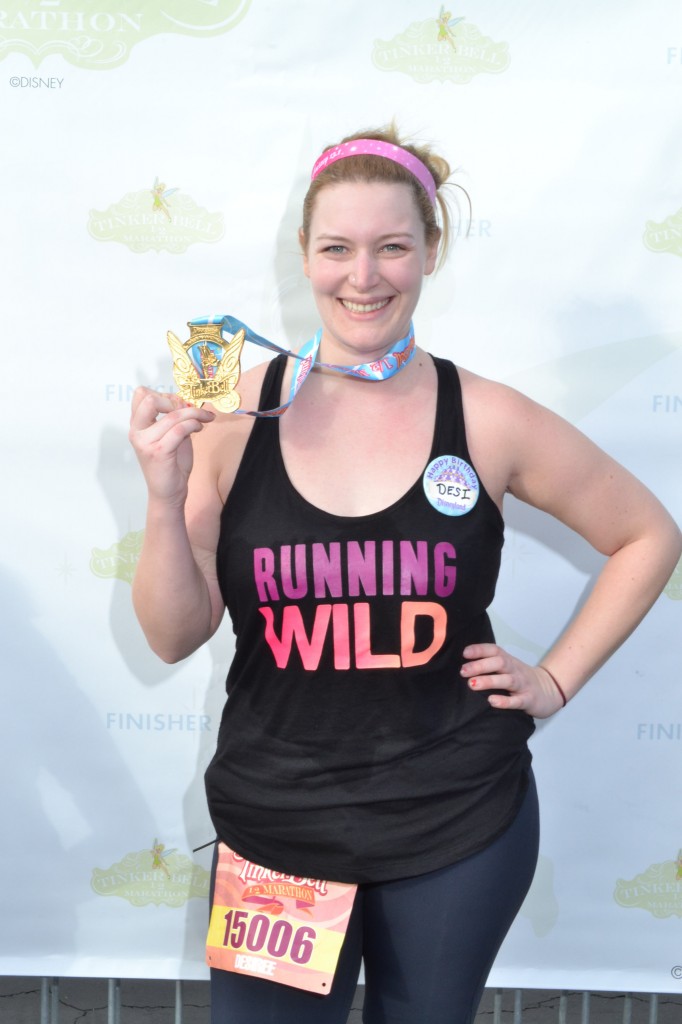 Am I going to do runDisney again? Yes, probably. I want a Coast to Coast medal, and I’ve never been to WDW, so we’re looking at doing Wine and Dine. (But after that, I might not do any others.) It just feels like a LOT of money to spend on an only okay experience. Am I glad I did it? Yes, overall, even with the hiccups along the way.  As upset as I still am about the timing chip, that alone shows me how serious I have gotten about my running which makes me happy. I feel like a Debbie Downer for having a bad runDisney experience but maybe gigantor races are just not for me!