I’m officially, finally, a half-marathoner!!! Over the weekend I FINALLY got to do the Run Rock n Roll half marathon in Cleveland. I apologize – I know I get long-winded with recaps, but maybe this will be the last lengthy one and in the future it will just be greatest hits. 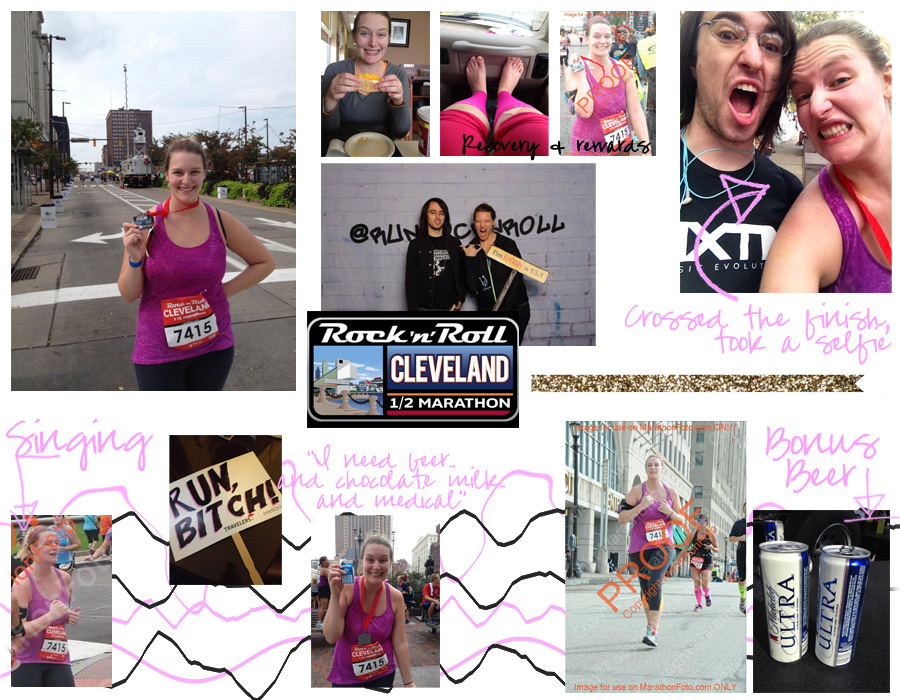 I flew up to see Sixx on Thusday night, so I spent the whole weekend with him. We headed to Cleveland on Saturday morning and as I was checking my race info on the way, I noticed that none of the documents had an actual physical address for the expo. I figured it couldn’t be that hard to find, because one did have a cross street, and an expo center should be well-signed, right? Nope – not well signed. We couldn’t find it, so we elected to park at the hotel and walk over. We found it that way but it still wasn’t very clear and the only reason I even figured out what building it was was that I saw a Run Rock ‘n Roll sign inside the glass door. The expo was super empty when we got there around 10:30 so that was really nice. It was also very small – since the only one I’d been to before this was the Flying Pig one which was HUGE and awesome, I was kind of disappointed – but that also meant I escaped without spending any money. (Which also meant I came in $200 under budget for the vacation, holla!)

We were able to get into the hotel early (yay!) but would have had to pay for late checkout

(boo.) After we did a little settling in, we took showers and made a plan to hit the casino. Fun fact – I do love gambling. I also really love casino buffets, and as soon as I walked by the spread at the Horseshoe, my plan for a healthy race weekend went out the window. Oops. After we feasted, we hit the slots for a little while before returning back to the room. Neither of us won big, but I only spent $3, so I’ll call that a win for some cheap entertainment. We spent the rest of the evening relaxing, I ate more crap for dinner (Irish Nachos at Tilted Kilt – yum!), I taped my knee, and went to bed at 9. (My peaceful slumber was interrupted around midnight by the loudest hotel party I’ve ever heard next door. I was extremely close to running out into the hallway naked and giving them a piece of my mind, but settled for calling security.) I had been nauseous and impatient and anxious all day for the race – I wasn’t nervous, just so excited for it to come. All of my things had been set out in the hotel room, I took the gratuitous “Flat Desi” picture, and pinned my bib to my shirt. (Lesson learned – do this while wearing the shirt, or else it won’t be centered and will rub on your arm.) 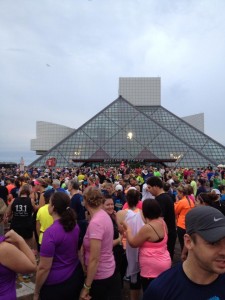 FINALLY my 6am alarm went off! I hopped out of bed, took a quick rinse, and got myself ready to go. I knew Sixx wouldn’t be walking me to the start line, which was fine. Before I headed out I stopped in the lobby bathrooms to shake out the last of the nerves I could get out, and met a nice couple from Pittsburgh on my walk over. She was running her first half too and it was nice to walk over with them, talk to them, and get a few last pieces of advice. I dropped my bag at gear check and thought “well maybe I ought to just jump in the port-a-potty line..” Can’t hurt, right? Lesson learned: don’t listen to the race volunteer directing you to shorter lines “down there.” They aren’t shorter and they are farther from your corral.

I did a little stretching, really enjoyed the electric guitar Star Spangled Banner, and then Corral 1 was off… then Corral 2… then, finally, me in Corral 7. My plan was to run one song, then walk one. My secret goal I wasn’t talking about was 2:45. When I heard my first split on Nike+, I was shocked – 11:26. Faster than I have ever gone. It was awesome! I kept a great pace and when I thought about slowing down, I thought how freakin’ awesome it would feel to finish under 3 hours. That kept me going for a really long time, as did conversation with other runners. The signs in Ohio City at mile 5 were great, and the aid station volunteers were fantastic. I think it was around mile 7 when I started doing math and realized that if I kept my pace, I was going to go sub-2:40. That made me so happy I wanted to cry. I literally never thought that was possible. I paced myself with other runners (since I made the mistake of not shuffling my music AND putting the Lana del Rey album on the playlist.. what was I thinking? way too slow) and raced those around me.

I was feeling strong and nomming on my PowerBar chews every 30 minutes and blessing the Gatorade volunteers. I’ve never been so happy to see Gatorade in my life. I was doing great until mile 10 when the weird pain in my foot got too much to bear. It was a new ache in the arch of my foot that I’ve never felt through any of my training. I had been pushing through it for two miles before it finally got too much and I had to slow WAY down. I was pretty devastated and upset, but I had to tell myself that for my first half marathon, the real goal was to finish. I hobbled through 10-12, pushing past the pain and medical tents, and managed to do some jogging on the last 1.1 miles. The volunteers on those last miles kept saying “the finish is just around the corner,” so when I finally saw Sixx at mile 13.05 and he said it – I had some colorful words for him 🙂 I wasn’t able to sprint the last quarter mile like I like to because the GPS tracker was off on my app, so I only got in the last .1, and I finished in 3:04:07. I’m pretty upset about it. Sixx was waiting on the side just past the medals, and I went over to him, started handing him all of my gear and just said “I’m going to the medical tent.” He walked along and as I was collecting chocolate milk and bananas and the rest I would hand it to him. (Lesson learned – always bring a pack mule! :)) Of course I then bypassed the medical tent and strained my neck to slam my chocolate milk while I tried to catch some of Gavin DeGraw’s set but that didn’t last too long. I was just impressed with myself that I didn’t hurt myself more seriously than I did, and I didn’t feel bad at all when I was sitting around plenty of other runners getting ice saran wrapped to their bodies.

After that I hit the beer tent. I drank my free beer and then was handed another complimentary beer which was awesome, but I was in no position to drink it (so I stuck it in my bag and drank it later that night.) I ate Skyline Chili and then we went home, the end. 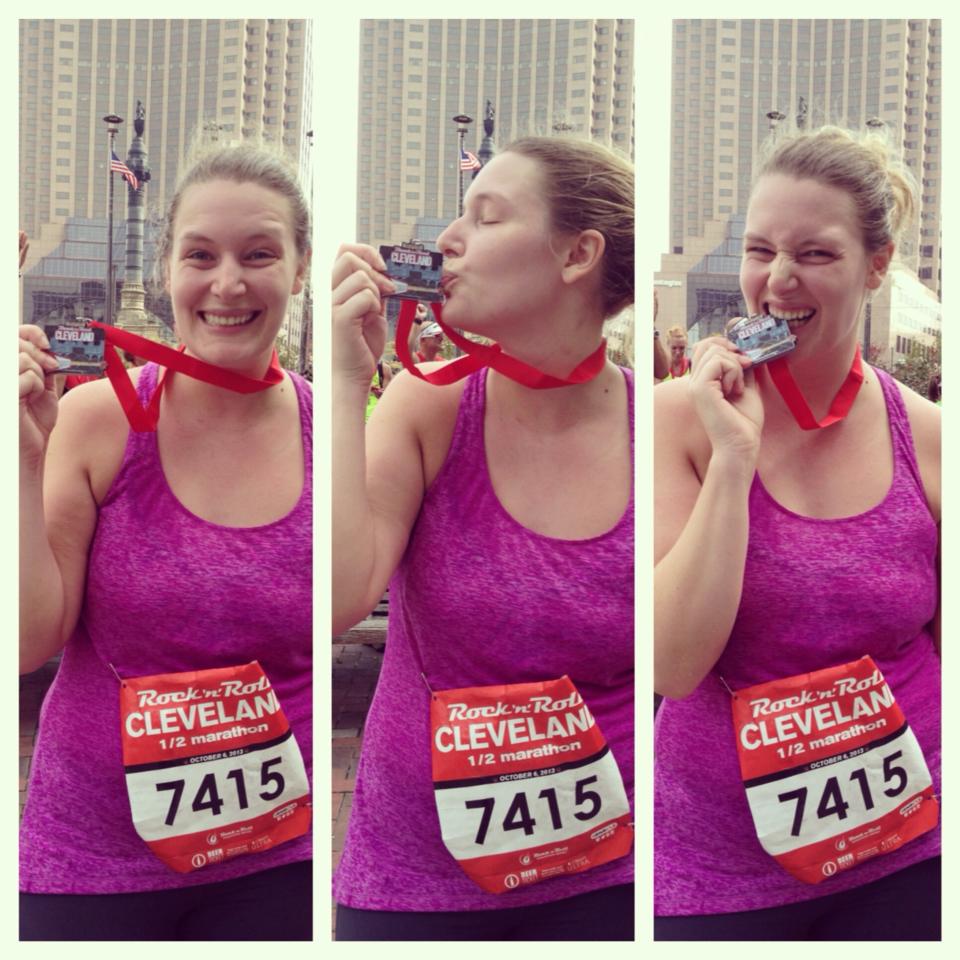 So.. I’m disappointed. To be going at such a great pace for me and then fall on my face from a new pain that I’ve never felt before is truly frustrating. At least I have Real Girls Run in a few weeks to redeem myself!