Saturday I pulled a 5k doubleheader! After Color Me Rad, I headed down with a friend to Chesapeake for Cosmic Run. She had originally agreed to just ride down with me because I wasn’t sure how awake I would be for the drive back after getting up at 5am, but I ended up talking her into letting me register her. Since I had hit my goal time in the morning race, I walked the majority of this one with her. 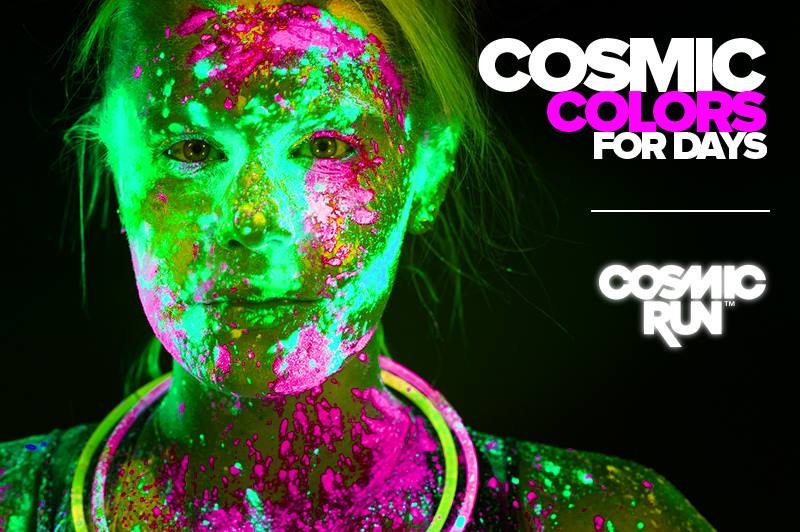 At packet pickup, I had the pleasure of meeting Tyler, who is the race director I’d been talking to while setting up the Cosmic Run giveaway for Washington DC. He was great and we headed back to the car to put our bibs on and get glowy. The packets included some glowsticks and a glow-in-the-dark temporary tattoo. We also snagged some glow-in-the-dark shutter shades and light-up shoelaces! 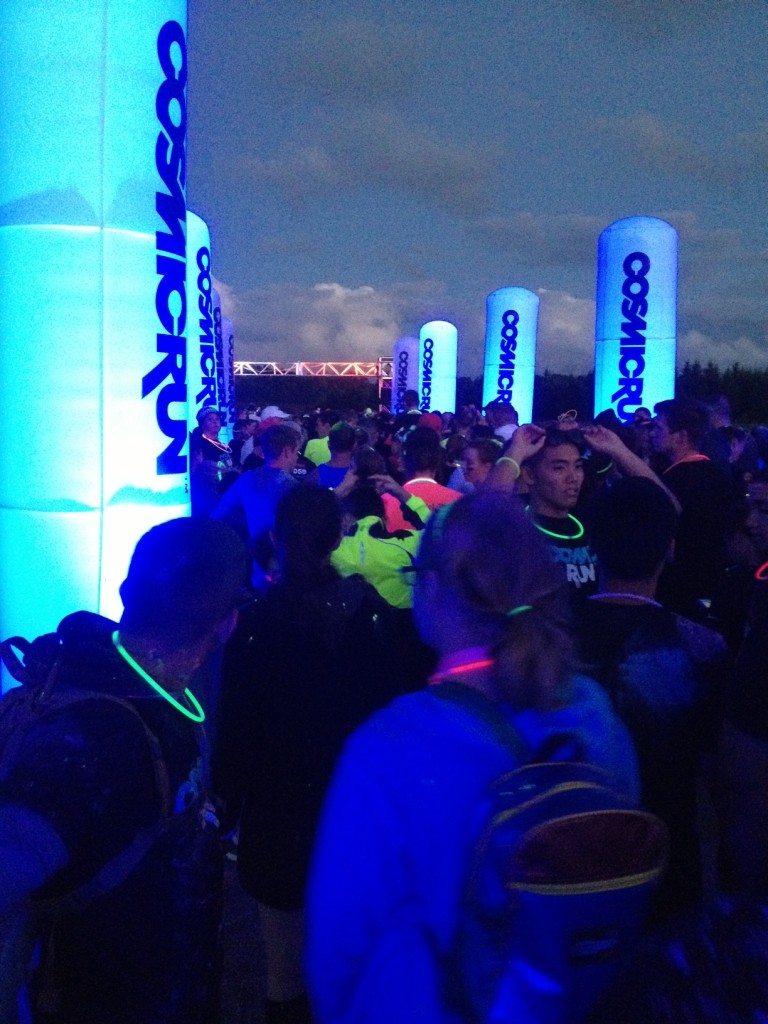 One thing that I wish had been different in the registration/pre-event info is that instead of e-mailing race day info to everyone, it was put on their Facebook page. That ended up working out because I didn’t have service for the majority of the day, so I couldn’t access it myself – bless my mom for checking it out for me. There were several different start times listed and I wish it would have been more clear what time the race actually started and that there were different waves being sent at different times, but those were small annoyances. It’s a new series and bearing that in mind – I thought it was organized.

I wanted to use the restroom pre-race – but to my dismay, there was only one port-a-potty at the start and the line was looooong. We thought the race was about to start so I figured I could hold off 45-60 minutes and use it at the end. We ended up standing in the queue for about 45 minutes before the first wave actually went out. We went in the second wave, and it was pitch black. 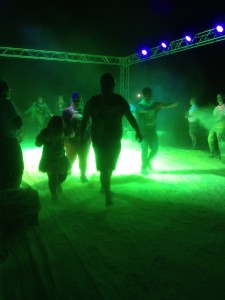 I was really happy with the attractions along the race course. There were more color stops and dance floors than I had expected and it was awesome. As a dancer I loved the idea that I could stop and dance mid-race 🙂 The water stop on the course was well-stocked, but I could tell that most of the audience were not runners as they stopped at the first end of the table.

The biggest complaint I had about the day was the terrain itself – it was held on a working tree farm, and the “road” was mostly gravel. There were parts where the path dropped off pretty severely and since it was a night run and not well-lit, I was nervous that in trying to stay out of the way of runners (some of whom were NOT very kind!) one of us would go tumbling down into the ditch. I did see several people fall. Some parts of the course were roped off with caution tape, but most of it was not. 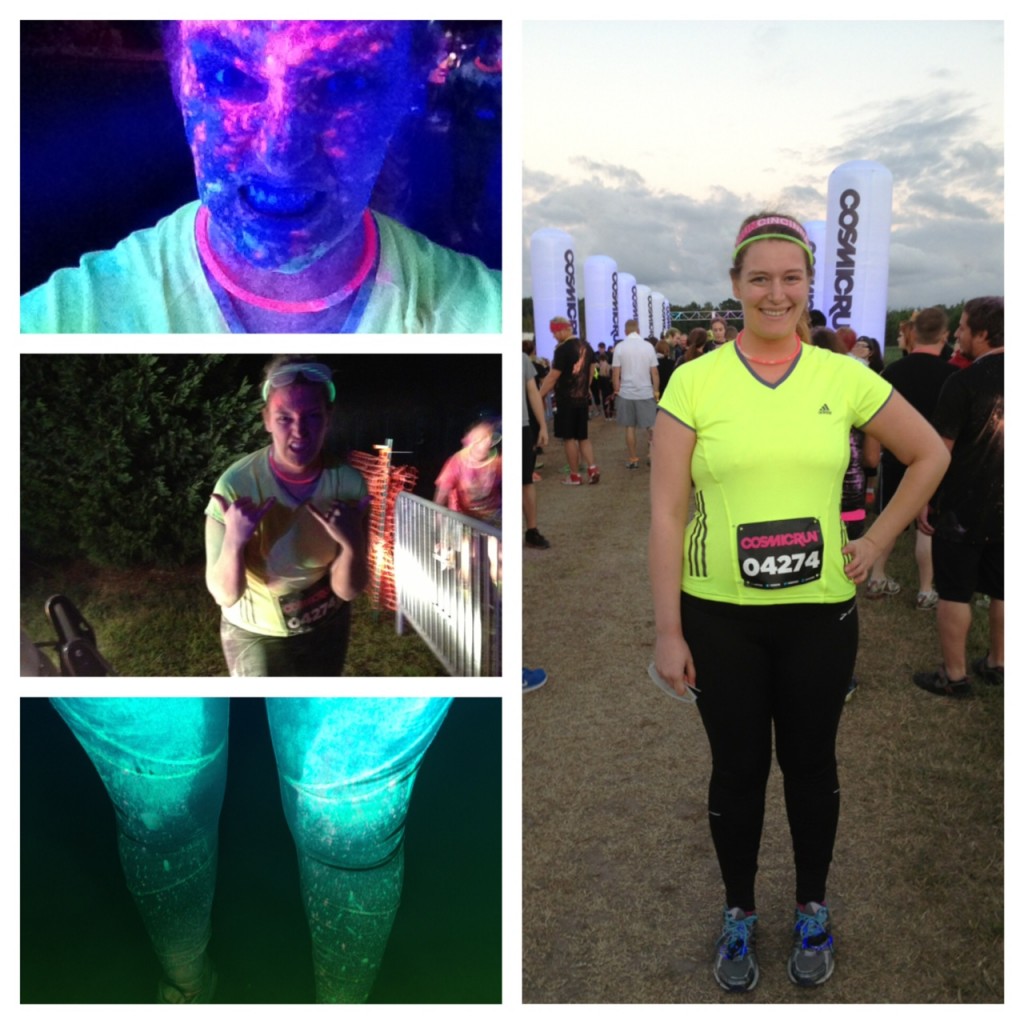 The color they threw was actually super fluorescent, just like the promo pictures. I had expected the color to be much more dull in real life, but it wasn’t at all. The finish line was a big stage with a great DJ, beer tent, and party going on. We finished in 1:02, and I was so proud of my friend for trying something she didn’t think she could do. Overall it was a great race, super fun, and I can’t wait to do it again in DC – click to enter a giveaway!

I received a complimentary entry for both the Virginia Beach and Washington DC races, but all opinions are my own.

2 thoughts on “Dancing in the Dark {Cosmic Run Recap}”