I’ve been feeling kind of down lately about throwing all my extra money at debt – and I know I did it to myself, but it sucks that I’m paying off things my younger self enjoyed and I feel like I’m not able to do a lot of things for 2013-Desi. I decided to take a look at how much I’ve actually paid down this year, to see if it would make me feel like any progress is being made. So all the payments I have made this year have included… 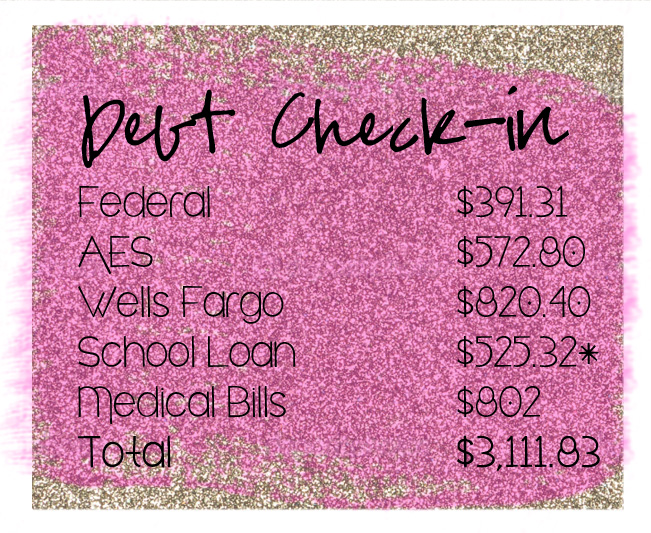 Despite my best intentions, I haven’t been as dedicated to my plan as I had hoped, for a few reasons: I flew home over Memorial Day weekend. The flight and trip were both relatively cheap, but that’s still $300-400 that didn’t go to these debts. I also had two unexpected emergency trips to Ohio (plus my planned vacation) and even though I stay with my family, roundtrip gas is sometimes as much as $100. I had some other medical bills that I paid out of pocket, including two PCP visits, a physical therapy session, and will have my yearly check up soon.

Unfortunately, most of the remainder of the year looks the same: I have at least two flights to book, and at least three more trips to Ohio – this doesn’t include the possibility of moving, either, as I am still pursuing other opportunities to be closer to my family. Plus, I did finally give in to Sprint – I dipped into my emergency fund to upgrade my phone. After a week of not being able to answer calls (it would crash my phone) and text messages being unintelligible, I gave in. My iPhone was $99 from the Apple store, where I also got a $50 iTunes gift card – score. I won’t know if/what Sprint ends up charging until my next bill. They told me $106 to upgrade, but after the struggle with them I’ve been enduring for now seven months – I’m not sure. I will fight to the death to make sure that’s what I end up paying, though.

Adding all those up has really motivated me because it shows how much more progress I really have yet to make – so my goal for the rest of 2013 is to put another $5000 at my debt. I’d still really love to pay off the smaller of my AES loans (a little over $3,000). I know $5000 is feasible because I’m on a shopping ban. It will just be a fine balance between saving for Disney, paying my loans, and finding a spring marathon (more on that later :)) It’s been interesting to consider where I’ve been spending my money over the past few months, especially since I’ve struggled at recording it.

How do you keep yourself motivated when you’re feeling the debt fatigue?