A year ago I was unathletic (I had just cancelled a gym membership where I started strong but fell off three months in), horribly depressed, maybe still drinking too much, and generally doing a lot of unhealthy things. I was just beginning my juicing journey, and I’ve come a long way in the last year. It’s fitting that my first race weekend was Flying Pig (even though I didn’t understand the reference until this weekend. I was just all OH HAHA PIGS ARE CUTE! I LOVE CINCINNATI! so that’s how I picked it to be my first.) Essentially – if you would have told me that in a year I would grow to love running, I would have laughed you out of the bar. I had originally planned to run the 10K, but dropped down to the 5 after being injury-plagued for a few months leading up to it. (And, okay – maybe being a little lazy in my training.) Here’s how my weekend shaped up and I apologize for the length – it was just super awesome!

On Friday, my cousin (NP) and I headed to Cincinnati to pick up our Saturday race packets and run the inaugural Little Kings one-miler. Cinci has a long tradition of brewing great beer, and this race was part of their beer series. On the way there, my cousin mentions she never got an e-mail with confirmation after she signed up for the miler, so as I start to read the email to her I notice it says “no race day registration.” She ended up not being registered but they did let her register and run that day (thank goodness, I would have been so alone!) We cut it way too short and didn’t even have time to pick up our Saturday shirts before we had to book it over to miler check in, but I was able to stop at the KT Tape booth and get my foot taped. By the time we were at the start line, I think we had already trekked a mile and a half. The check-in process seemed wildly unorganized to me. After check in, we had to walk two blocks to the shuttle. The shuttles weren’t running on time, and by the time we got to the start, our corral was already lined up to go. That was really frustrating for someone who was in her first race and super nervous anyway.

This run was almost completely downhill and we ran past some pretty interesting things. It started in a really bad part of the city, and we ran past bars and a storefront funeral home and casket store. I was too in my head and did walk a lot of it, but as soon as I saw the finish timer, I started sprinting the last downhill stretch. It was at 11:30 and I was determined to beat 12:00 – and I did it, even beating NP for a finish time of 11:42. Looking back I was listening to my head more than my body – my head said stop running you can’t do it and my body was kind of begging me to run. (The same thing happened on Saturday so it was nice to learn that for future races.) I was so happy to have finished but thought I was going to puke at the end from pushing so hard. We enjoyed our beers and watched the elite runners who finished sub-5 minute miles. It was the craziest thing I’ve ever seen. It was really hard to leave the Foxy Shazam show at the kickoff party (especially after two beers,) but off we went. 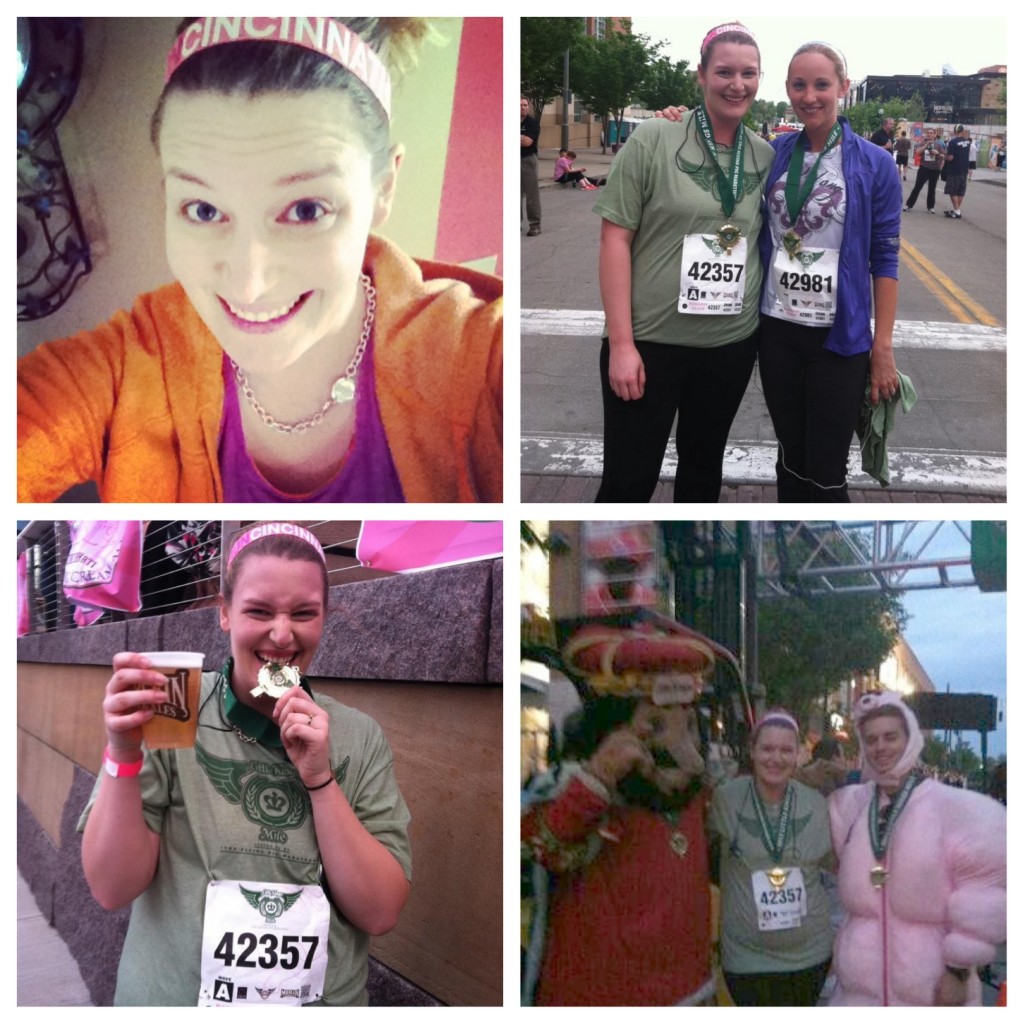 ready to go, NP & I with our medals, I run for beer, and with the mascots!

I had been more nervous about the mile than the 5k, so I woke up feeling good on Saturday morning. We put on our matching shirts and sweaty bands and headed down to Cinci. My goal for the day was 45 minutes. NP is a much faster runner than I am, and I encouraged her to go ahead of me if she wanted to, but she said she’d stick by me through most of it. (She also said that she was likely to stop at every bathroom on the course. Little did we know there weren’t any :)) I ran the first half mile or so before I had to stop. Again, I listened to my brain and not my body – but I learned. We started jogging a little more and her Sweaty Band flew off so what did I do? Doubled back and grabbed it. You don’t know the terror of turning around and seeing hundreds of people coming at you (well, maybe you do.) Around the mile and a half mark, she finally started running out ahead of me. I ran off and on enjoying the scenery, the cheering sections (I think for my next race I want a shirt that says you cheer, I run) and my iPod. The course was pretty flat until a killer hill – even though it was not a long stretch, it came out of nowhere since it was right after a turn. Finally I ran the last half mile or so and when I saw the last mile marker and timer I got so upset. The timer was at 48:00, but I thought well – that’s not too far off my time, which was going to be really hauling it anyway – let me beat the 50:00. It didn’t connect at the time that the timer was from the original start, and not when I crossed the start line. I did beat the 50:00 and it was incredible to hear them say my name as I finished, to high-five that pig, and to get engulfed by the blanket and medal. It was just so cool. The only complaint I have about the 5k was how crowded the finish was – it took about 15 minutes to get from the actual finish line through the Gatorade/food/water/etc. line to the recovery area. When we got home I was half elated, half PISSED to find my official finish time: 45:12. TWELVE SECONDS from my goal. You know where those twelve seconds were? That damn Sweaty Band. (I have to say that I truly LOVE Sweaty Bands. They are fantastic in my hair – I even bought three more at the expo, but everything slides off of hers. This would have been the second headband she has lost in a race after the Wine ‘n Dine Half last November. Her hair is just weird.) I’m still really proud and excited to get back in my running shoes. 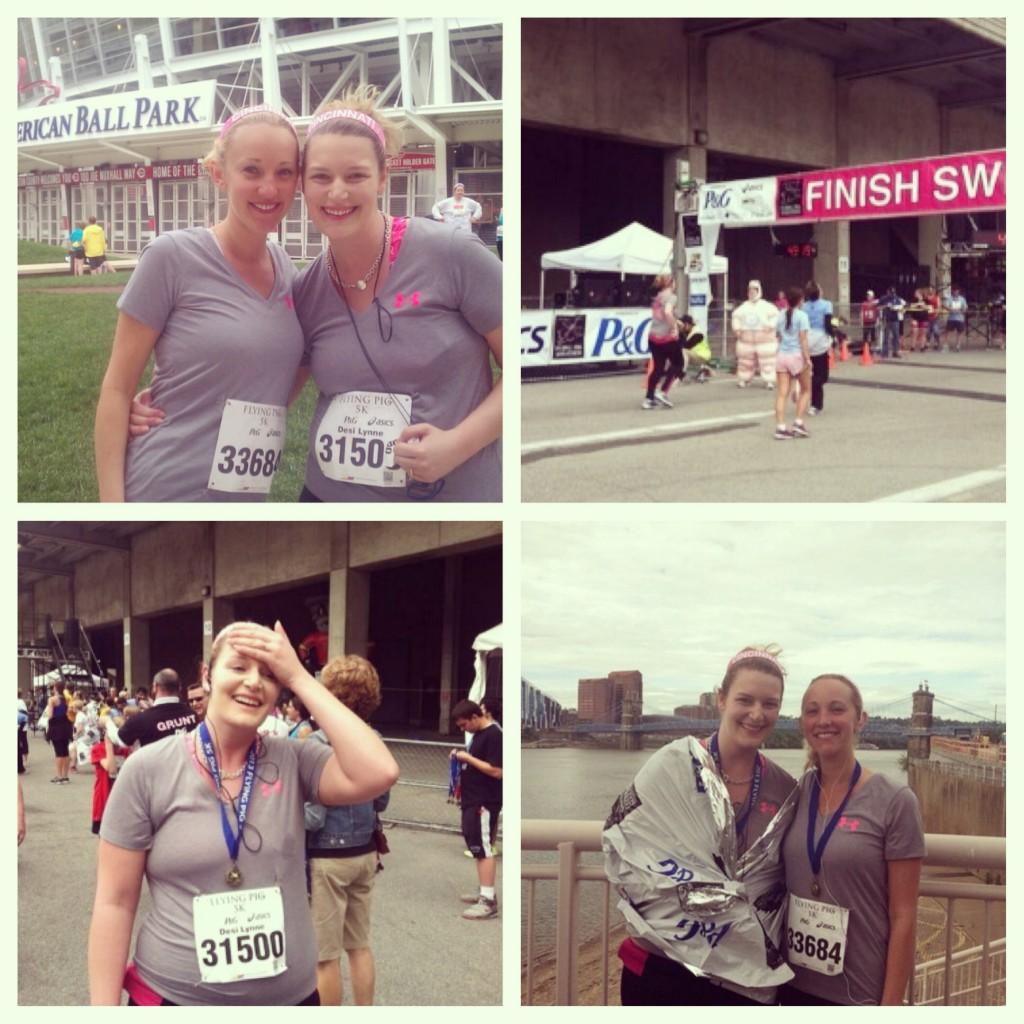 stretching at Great American Ballpark, running for that swine, “oh, my gosh,” and the Riverfront skyline

I do wish we would have gone out to cheer on Sunday especially since another cousin ran two legs of the marathon relay, but the weather was crummy and we were all dead tired (my two cousins and three nieces and nephew and I all fell asleep curled up on the couch bed. I wish there was a picture of it.) If we go back next year and I’m not doing a Sunday event, I definitely want to volunteer. My music was crazy and it was so fun to listen to music that I haven’t updated since 2009 – I definitely had some big smiles while I was on the course. Shoutouts to Girls Gone Sporty for the grant that paid for my registration fees, KT Tape’s social media team for putting up with my annoying tweets all weekend, and Shannyn (who I am pretty sure I referred to as my “running Yoda” at one point.) I’m already looking forward to next year and doing either the 3-way challenge or the 4-person relay with my family!

2 thoughts on “When Pigs Fly…: Running the Flying Pig”